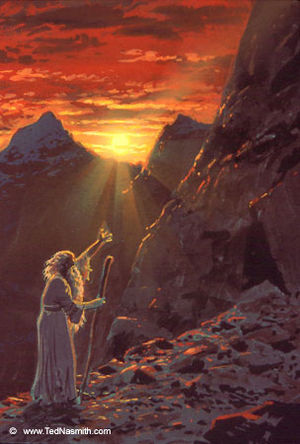 When Fingolfin died in single combat with Morgoth, the eagle Thorondor carried his body to a mountaintop north of Gondolin. Turgon, the son of Fingolfin, came and built a cairn over his body that no Orc dared to approach. Also in the aftermath of the Dagor Bragollach, Húrin and Huor were the first men to enter Gondolin, but they did not traverse the hidden ravine to reach the city - instead they were borne aloft by the eagles of Thorondor over the Encircling Mountains. Later they departed in the same manner and thus could not reveal the passage into Tumladen (and swore oaths to not reveal the valley's location).[5]

Then, after Maeglin was captured and revealed the precise location of the city, the host of Morgoth came to Gondolin, pouring over the Echoriad from the north and north east. All would have died within the city, but Idril had made a secret tunnel. She and Tuor led the remnants of the people of Gondolin out by this route and then they climbed into the mountains to the north, by the perilous pass known as the Cirith Thoronath. The refugees were attacked by Orcs and a Balrog. While eagles dispersed the Orcs, Glorfindel fought with the Balrog upon a pinnacle of rock and both fell into the nearby abyss. Like he did with Fingolfin, Thorondor came and brought Glorfindel's body up to the refugees, who buried him in a mound of stones beside the path. The Exiles of Gondolin then proceeded with their escape, eventually coming out of the mountains and into the Vale of Sirion.[7]

In his "Unfinished index" of The Lord of the Rings, Tolkien gave an alternate name for the Encircling Mountains: Eryd Echor, using the plural eryd of the Sindarin word orod ("mountain").[10]

In the early version of the legendarium in The Book of Lost Tales, the Encircling Mountains are named Heborodin,[11] which is Gnomish, from heb ("round about, around") + orod ("mountain").[12]