"Do you forget to whom you speak? Such things you spoke long ago to our fathers; but we escaped from your shadow. And now we have knowledge of you, for we have looked on the faces that have seen the Light, and heard the voices that have spoken with Manwe."
― Húrin Thalion in The Children of Húrin, "The Words of Húrin and Morgoth"

The Edain was the name given by the Elves to the noble Men of the First Age who fought alongside with the Elves in the Wars of Beleriand.

Edain is normally the Sindarin word for Men (sing. adan "Man") and thus applied to all Men, though it became associated with only those who came into Beleriand during the Long Peace, the noble Three Houses who became close allies with the Elves and fought beside them against Morgoth. Other groups of Men who stayed in Eriador or the East; or entered Beleriand later in the First Age, such as the Easterlings, are not counted among the Edain.

The Edain were the ancestors of the Númenóreans or Dúnedain, the High Men of the Second and Third Age.

The ancestors of the Edain were those Men that awoke in Hildórien when the Sun first rose. Later they began migrating after coming into conflict with other Men that fell under the Shadow.[2] They were drawn to the West seeking the rumoured Great Sea and the Light found there. These Men were divided into three distinct peoples with their own language and appearance.[3]

As they continued moving west at some point the tribes separated into two hosts, two tribes moving north and the other south. The northern host was separated again,[4] the Lesser Folk of that host arrived at the shores of the Sea of Rhûn and dwelt at the feet of the nearby hills in the south-west. The other folk of the north host which was much greater than the previous came later and dwelt in the north-east woods near the shores. When the Greater Folk were able to craft boats so they could sail the sea they eventually discovered the Lesser Folk dwelling in the hills, but they didn't meet or exchange tidings often, as their tongues had already diverged from their original common tongue but they continued to remain in kinship.[5] Some of the Greater Folk stayed behind in Rhovanion, who seemed to had been the ancestors of the Northmen.[6][3]

During their wanderings the Lesser Folk made contact with the Dark Elves that still dwelt in the east[7] and they adopted "many words and devices" that influenced their language.[2]. They also encountered Dwarves whenever they travelled near mountains.[8]

The tribe that followed the southern route was different from the two Folk of the north and spoke an unrelated language.[2] They settled in the valleys of the White Mountains and were joined by a group of strange folk whom they called Drûg when they resumed their way to the west.[9] but also some remained behind, in Minhiriath and Eriador; those were the ancestors of the Enedwaith and the Gwathuirim.[3]

Eventually the three Folks crossed Eriador and arrived at the Blue Mountains, Bëor and some of his folk were the first Men to enter Beleriand around the fourth century of the First Age. The next year the vanguard of the southern tribe followed and made contact with the Elves of Ossiriand, followed by the Greater Folk of the north. These Men therefore spoke two different languages, one of them being divided in at least two dialects.[2] They already had met Dwarves and Avari in the East and had adopted some of their speech.

The tribes of Men became Elf-friends, they entered the service of the Eldar of Beleriand and were ennobled and consisted of the Three Mannish noble Houses:

The Drûg that accompanied the Haladin to Beleriand lived with them in the forest of Brethil, the Eldar named them Drúedain and admitted them into the rank of Atani.[9]

Some Edain grew suspicious of the Elves, believing that their journey to Beleriand was for nought and some returned to Eriador.[2]

The Edain were allies of the Elves and took part in the Wars of Beleriand against Morgoth and suffered heavy losses throughout the course of the war. In the Dagor Bragollach the House of Bëor was nearly wiped out and their folk massacred, the few remaining fled to Hithlum and Himring.[10]

After Morgoth's victory in the Nirnaeth Arnoediad the lands of the Hadorians were invaded by Easterlings and they were subjugated by them.[11]

Eärendil, a descendant of all Three Houses of the Edain, sailed to Valinor and begged the Valar for aid against the power of Morgoth in Middle-earth which they accepted. The Edain fought with the Host of Valinor against the forces of Morgoth in the conflict known as the War of Wrath. Morgoth was ultimately defeated at the end.[12] 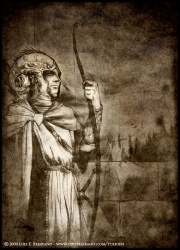 After the War, the Edain were honoured and blessed by Eönwë in body and mind. They were granted the island of Númenor by the Valar as a gift for their fight during the Wars of Beleriand, their loyalty to the Elves and their suffering.[13]

Those of the Folk of Hador settled most of the island, while those of Bëor settled mostly in the north-west, where they continued to maintain using the Sindarin language.[3]:329[14] Few of the Folk of Haleth had survived the ruin of Beleriand,[15] and some of them settled the island along with the Drúedain that lived with them.[16] Thus the Edain's descendants became a race far greater than all other Men in Middle-earth, living within sight of the blessed realm.

Some of the Edain did not leave Middle-earth to Númenor, some fled the disaster of the war to Eriador in the east, and their descendants remembered rumours of the deluge of the land beyond the Blue Mountains and feared to look upon the Sea.[3]

When the Númenóreans returned to Middle-earth, they encountered many Men who were related to the Atani: they classified them as Middle Men, and established friendly relations with them, such as the the Northmen or the Men of Bree. Other Men, such as the Enedwaith, were not recognised as Middle Men even though they share some kinship with the Folk of Haleth, but because they were hostile to the Númenoreans.[3]

The Edain were noble in spirit, and their appearances differed between houses, although during the progress of the First Age, they mingled by the disasters of the War of the Jewels and intermarriage, so their differences became less marked.[3] Those of the First House were for the most part dark-haired and stocky, with grey or brown eyes and skin ranging from fair to swarthy. Little is known of the characteristics of the Second House, save for that they were dark of hair. Those of the Third House were golden-haired and tall, with fair skin and blue eyes.[3]:308

Upon their arrival to Beleriand, they were taught much lore and wisdom by the Eldar and their manners and arts were enhanced.[3] They were loyal to their benefactors, strong and fierce in battle. Their lifespan approached 90, probably quite more than of their ancestors, although that was the case only in peaceful times.[17]

Their descendants, the Númenóreans, were further blessed and ennobled. Their first King Elros the Half-elven was a descendant of two unions between the Edain and the Eldar.

In Beleriand, most of the Edain adopted the Sindarin tongue, although their native language was Mannish with elements from Avarin and Khuzdul[18] after their first contact with the Dark Elves and Dwarves, respectively. The language of the survivors of the First and Third Houses was the ancestor of Adûnaic; the language of the Second House was unrelated to them. (See also: Taliska.)

edain is the plural of adan, "man" in Sindarin.

The Sindarin word Edain, literally meant Second People, and originally referred to all Men, but later it only applied to the Men of Beleriand and their descendants. The Quenya cognate was Atani (singular Atan), but the term kept its old meaning.[source?]

The noble Edain were also known as Atanatari which means Fathers of Men.