Edoras was the capital of Rohan that held the Golden Hall of Meduseld.

Rohan's first capital was at Aldburg in the Folde, until King Eorl the Young or his son Brego built Edoras.

Wulf son of Freca the Dunlending, invaded Rohan in T.A. 2758 and took Edoras usurping the throne in Meduseld. But the Long Winter, which had lasted five long months, ended and Fréaláf son of Hild came out of Dunharrow and with a small band of men, surprising Wulf, he attacked Edoras and slew Wulf, regaining the city.

It was here that Aragorn, Gimli, Legolas, and Gandalf the White met with Théoden.

The city was built on a hill in Harrowdale, a valley of the White Mountains which lay under the great mountain Starkhorn. The river Snowbourn flowed past Edoras on its way west towards the Entwash.

Edoras was encircled by a wall, and a dike dug around the hill. It had a spring whose water flowed in a channel along the main road.

Outside, there was the Barrowfield, with the tombs of the Rulers of Rohan arrayed in two lines by the War of the Ring. Simbelmynë grew there. A rutted road led from the city past Snowbourn.

The name Edoras is said to mean "the courts" in the Mark-speech of Rohan.[2] 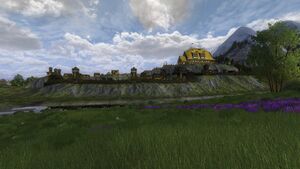 Edoras in The Lord of the Rings Online

Edoras was built on Mount Sunday.

Unlike many in-game settlements much smaller in size and prominence, Edoras is not considered a "capital" of its region. This is because early in the story Edoras is evacuated, with all inhabitants moving to Dunharrow, and for the majority of the game Edoras sits empty. Instead, Aldburg functions as the "capital settlement" of the Western Rohan, hosting the hub for swift travel and various player facilities.