Difference between revisions of "Fall of Gondolin"

The Fall of Gondolin, or the Siege of Gondolin, was a dramatic battle in which the hidden city of Gondolin was destroyed after its location was betrayed to Morgoth by Maeglin. As Morgoth intended, the destruction of the majority of the Noldor peoples was nearly complete, though a handful of survivors managed to escape. Here the battle is mainly told as written in the twenty-third chapter of the Quenta Silmarillion, but much is told in the Lost Tale of "The Fall of Gondolin".

Gondolin had long been a hidden city, heavily fortified and cut off from the Noldor's allies and enemies alike. The Elf Maeglin, a lord of Gondolin, resented both Turgon and Tuor, primarily because of the latter's marriage to Idril, whom he desired as a lover. Once, he was far away from Gondolin, searching for ore in the mountains. Orcs captured him, and he pleaded with and bribed them to bring him to Morgoth rather than kill or torture him. Morgoth recognized Maeglin, and told him he would make him ruler of Gondolin and husband of Idril if he betrayed the Noldor and gave Morgoth information on how to gain access to the city. Maeglin agreed to the treachery, and was given a token by Morgoth that would supposedly protect his life during the assault. Maeglin returned to the city and spoke nothing of his capture. However, Idril foreshadowed the dangers to come, so she began working on a hidden passage deep beneath Gondolin that would later act as an escape route.

On Midsummer of F.A. 510,[1] the Gondolindrim were celebrating the festival of the Gates of Summer. As they gathered in the night to observe the sunrise over the mountains, a light was seen in the North instead of the East: the armies of Morgoth were coming and nothing could stop them until they reached the walls of the city. Balrogs, Orcs, wolves and dragons surrounded the city, and a siege began.

Of the deeds of desperate valour there done, by the chieftains of the noble houses and their warriors, and not least by Tuor, is much told in The Fall of Gondolin; of the death of Rog without the walls; and of the battle of Ecthelion of the Fountain with Gothmog lord of Balrogs in the very Square of the King, where each slew the other; and of the defence of the Tower of Turgon by the men of his house-hold, until the tower was overthrown; and mighty was its fall and the fall of Turgon in its ruin.
—Quenta Noldorinwa, QII §16

During the havoc of the battle, Maeglin went to Tuor's home on the southern wall and attempted to assassinate Eärendil, but was caught by Tuor before he could do so. There Maeglin was struck down and fell from the wall to his death below, fulfilling the curse of his father Eöl. Then Tuor and Idril gathered as much Gondolindrim they could and led them to the secret way. The Exiles of Gondolin could cross Tumladen not being noticed, as the fountains and burnings of the city had covered the plain with fume and mists. 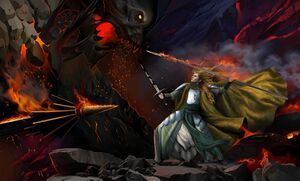 Glorfindel and the Balrog by Steamey

Although Morgoth was ignorant of their escape, the survivors found an ambush of Orcs while crossing the Cirith Thoronath, and a Balrog was with them. The Eagles protected the refugees against the Orcs, but Glorfindel fought the Balrog alone. He slew the beast but was slain in turn, and both fell into the abyss off the mountain pass.

Though Morgoth's marshal Gothmog had fallen in the battle, he had conquered the greatest and last city of the Noldor and had almost entirely wiped out their people. In the north, Morgoth's victory was complete. However, this would later be his doom, for years after the siege, Eärendil, a survivor, sailed to Valinor where he requested their aid in defeating Morgoth. This would lead to the War of Wrath, after which Morgoth was cast into the Void.