Fingolfin was the first High King of the Noldor ruling in Beleriand, eldest son of Finwë and Indis, younger brother of Findis, older brother of Írimë and Finarfin, and the younger half-brother of Fëanor. His wife was Anairë and his children were Fingon, Turgon, Aredhel, and Argon.

During the days of the Two Trees in Valinor, as Melkor's lies were taking root in Noldor minds, a number of the Noldor started to believe that the Valar were somehow restraining them from going back to Cuiviénen in Middle-earth. Melkor's cunning had caused the suspicions he sowed to outweigh the Noldor's knowledge that the greatest Gift of the Valar was total free will.

In the face of this public humiliation, Fingolfin turned quietly and walked away without a word to Fëanor, in an effort to avoid division and dissension within his father's House and among the Noldor.

Fingolfin and his people saw the smoke of the ships from afar, and chose to travel through the icy Helcaraxë, for they were ashamed to go back to Valinor, and were angry at Fëanor. The journey was hard and many died, yet they were filled with hope when they saw the Moon for the first time. Soon after, at the rising of the Sun, he came to the Gates of Angband and smote upon them, but Morgoth stayed hidden inside. Fingolfin and the Noldor, realizing they could not be victorious in this way, then came to the northern shores of Lake Mithrim, from which the Fëanorian part of the host had withdrawn.[6] 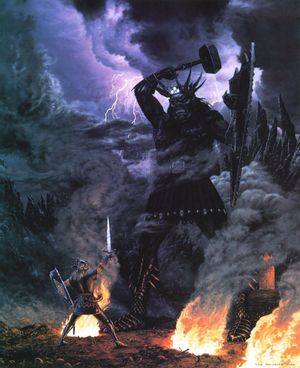 After defeating the Orcs in the Dagor Aglareb ("Glorious Battle"), Fingolfin maintained the Siege of Angband for nearly four hundred years. But the Siege was ended by the sudden assaults of Morgoth in the Dagor Bragollach ("Battle of Sudden Flame"), and many peoples of Beleriand fled. In the end, Fingolfin rode to Angband alone to challenge Morgoth to single combat. Those who saw him thought Oromë himself had arrived; for a great madness of rage was upon him, so that his eyes shone like the eyes of the Valar.[7]

Fingolfin died there after a mighty duel, wounding Morgoth seven times with his sword Ringil, and struck one last punishing blow to Morgoth's foot before he broke the High King. Morgoth's wounds never healed after that battle, and he limped everafter. Thorondor, the King of Eagles, rescued Fingolfin's body and brought it to a mountaintop overlooking Gondolin, and Turgon built a cairn over the remains of his father.[7]

The name Fingolfin is Sindarin, but it is never glossed, although it is said that it is the Sindarized form of the name Finwë Ñolofinwë ("Wise Finwë").[8]

However, in the Noldorin phase of the language, Fingolfin is given as "Magical Skill".[9] In later versions, Tolkien considered changing the name to Ingolfin, as coming from Ingoldo, but the idea was soon discarded.[10]

His father-name was Ñolofinwë, with the stem ñolo (related to "wisdom") attached to the name of his father. Later, during the Exile of the Noldor, Fingolfin added Finwë to the beginning of this name, in pursuance of his claim to be King of the Noldor after his father's death.[8] This would result in Finwë·ñolofinwë.[10]

His mother-name was Aracáno ("High Chieftain"), which he gave to his son Argon.[11]

Earlier titles in Noldorin were Aran Chithlum ("King of Hithlum") and Taur Egledhrim ("King of the Exiles").[12]

The first appearance of Fingolfin in the Legendarium is in a prose fragment, in which he is called Golfin son of Gelmir, carring an emblem with a silver sword upon gold.[13]