Fréaláf was the son of Hild, and thus the sister-son of Helm Hammerhand. When Rohan was invaded by the Dunlendings led by Wulf in T.A. 2758, Fréaláf was among the Rohirrim who took refuge in Dunharrow. However King Helm and his sons were killed in the invasion and the siege of the Hornburg in 2759, and Fréaláf was his heir.

Early in the spring Fréaláf led a daring surprise raid against the Dunlendings that recaptured Edoras and managed to reclaim it. With aid from Gondor, he eventually drove the Dunlendings back across both the rivers Isen and Adorn, freeing all of Rohan.[1] Those Dunlendings who had occupied Isengard were starved until they capitulated and left the fortress.[2]

At his coronation the Wizard Saruman suddenly appeared after years of absence. Saruman offered Fréaláf his support and friendship which Fréaláf accepted, as Rohan was just recovering from the war and the Long Winter. On Fréaláf's advice, Beren, Steward of Gondor, lent Saruman the keys to Orthanc, giving him Isengard to dwell in on the condition that he must protect it from another conquest by the Dunlendings. 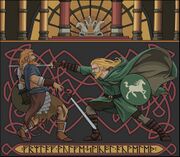 A tapestry depicting Fréaláf killing Wulf is found in Meduseld and can be acquired for use in player's houses.