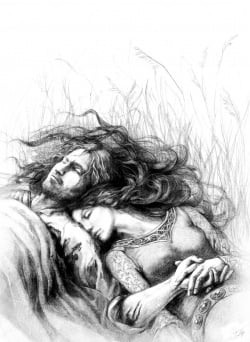 The Gift of Ilúvatar is death, the inheritance of Ilúvatar's Younger Children, which allows them to go beyond the confines of Arda, this world. Though the phrase commonly refers to this type of mortality, death is actually only part of the broader Gift given to Men: it is one with their ability to operate beyond the Music of the Ainur, which "is as fate to all things else". With this Gift, Men were to fulfill the world down to the finest detail.[1]

It was said among the Elves that after Men died, their fëar were gathered in the Halls of Mandos, and then departed from the World for a destination unknown even to the Valar. Whereas all other beings in Arda, including the Valar themselves, were bound to the World and its fate, the Gift freed Men from this destiny allowing them to shape their own lives as they wished. For this reason, the Elves, who must live as long as Arda exists and become burdened with its sorrows, often envy the Gift given to Men, and it is said that even the Valar shall do so as well.

But like all other aspects of life in Arda, the Gift of Men became darkened by Morgoth's shadow.[2] Men came to view death with great dread, and it became a Doom to them rather than a Gift.[3] Ancient lore kept in memory by the Wise among Men held that Morgoth had indeed brought the Doom of mortality upon them by seducing all Men to turn from Ilúvatar and worship him instead.[4]

The fear of death, though ubiquitous in all populations of Men, reached its peak in the later years of the isle of Númenor, where even the long life given to the Númenóreans was not enough to satisfy them because of their envy of Elvish "immortality", and their wise men did all they could to try to escape death altogether. These attempts to escape the Gift were, of course, unsuccessful since "the will of Eru may not be gainsaid". In the end, this desperation prompted the last King, Ar-Pharazôn, to take a great fleet to the Undying Lands in an attempt to wrest immortality from the Valar, falsely believing that these lands held the secret of obtaining everlasting life. But Ar-Pharazôn's hopeless quest for immortality brought its opposite to his people: Númenor was utterly destroyed, and the "Doom of Men" was visited upon all its inhabitants.[2]

However, those Men with the greatest understanding treated death as the Gift it was originally intended to be, and when their time came gladly gave themselves up to it.[5] For example, the earlier Rulers of Númenor in the Second Age, and Aragorn in the beginning of the Fourth Age, accepted the Gift at the natural end of their lives.[6]