Húrin the Tall, also referred to as "Lord Húrin" was a Gondorian noble during the War of the Ring.

Lord Húrin was assigned the office of the Warden of the Keys of Minas Tirith and for that he was also known as Húrin of the Keys.

Húrin fought in the Battle of the Pelennor Fields, during which the Rohirrim were outnumbered and hard-pressed. Húrin, along with Forlong, Hirluin, and Imrahil came to their aid.[1]

After the battle, the armies of Gondor and Rohan marched to the Black Gate while Lord Húrin himself stayed in the city to command the small garrison that stayed behind.

A barricade was laid in place of the destroyed Great Gate at the gatehouse of the city. After the Fall of Sauron, at the coronation of Aragorn, he ceremoniously opened that barricade for the entry of the new king.[2] 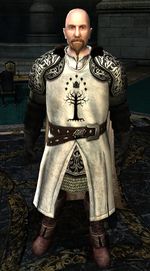 Before the siege of Minas Tirith begins, Húrin can be found right inside the city gates, making the final preparations for the upcoming battle. During the siege proper he fights on the walls of the First Circle alongside other Lords of Gondor. After the battle is won, he is found right outside the city gates next to Imrahil and tasks the player with quenching the remaining fires and burying those who died fighting within the First Circle. He stands behind Steward Faramir during the coronation of King Elessar.