Difference between revisions of "King of Gondor" 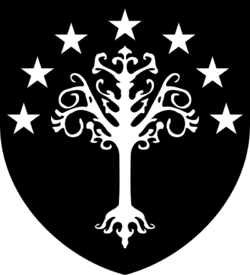 Coat of arms of the Royal House of Anárion

The Kings of Gondor were the Númenórean (later known as Dúnedain) rulers of Gondor. Each king governed the realm with the frame of ancient law, of which he was administrator (and interpreter) but not the maker.[1] The line of the Kings would endure for over two thousand years, but would eventually fail with the presumed death of Eärnur. The kingship would be restored later by Aragorn, the hidden descendant of Elendil.

Elendil was the first King of Arnor and was succeeded by Isildur. Elendil ruled over both realms as High King of the Dúnedain-in-exile Isildur succeeded as High King as well upon his father's death. Isildur committed Gondor to the rule of Meneldil the son of Anarion as sole King of Gondor, but Isildur's royalty in the South-realm remained, as his line was by right High King over both Arnor and Gondor, though after Isildur's death, the realms were split. Isildur's son, Valandil, opted to not press his claim as High King of the Realms-in-Exile. Thus were the two realms sundered from each other, though Isildur's line technically could still lay claim to the dormant High Kingship.

The kingship of Gondor, unlike Arnor which had a direct line from Isildur to Arvedui, underwent several succession crises even before they eventually failed altogether. The first king of Gondor who had no direct offspring was Falastur, who had to be succeeded by his nephew Eärnil I. The next childless king was Narmacil I, who had to be succeeded by his brother Calmacil. The worst crisis, however, was that of the Kin-strife, a civil war which resulted in both the loss of Umbar and the shedding of royal blood. From this war, Eldacar emerged victorious, but the House of Anárion was greatly weakened.[2] The house suffered further in the invasion of the Wainriders, which killed the king Ondoher and his sons. Only his daughter Fíriel survived, who previously had married the king of Arthedain, Arvedui.

Arvedui made an attempt to be named king of Gondor himself, citing two reasons. First, Isildur did not give up his being High King of both realms in exile, instead only committing the rule of Gondor to Meneldil, but not giving up his royalty. This meant that Isildur's heirs technically still held royalty within Gondor, even if they did not rule. Secondly, according to the Numenorian laws of succession, the sceptre would go the oldest child of the ruler upon their death, be they male or female. Thus, technically the kingship would have gone to Arvedui's wife Fíriel rather than a claimant from outside Ondoher's immediate family. However, the council of Gondor elected to ignore Arvedui's claims, and the kingship went instead to Eärnil II, who was a member of the house of Anárion.[3] After him, the crown lasted only one generation before the last of the kings.

The final king was Eärnur, who reigned for only seven years before he was challenged to single combat by the Witch-king of Angmar. Enraged by this, Eänur accepted the challenge and rode to Minas Morgul, where he vanished and was never seen again. After his disappearance, however, there was no member close enough to the House of Anárion left in the realm of Gondor to make a claim to the kingship. Rather than suffer another civil war, the rule of the Kingdom of Gondor fell to a succession of Stewards.[4] 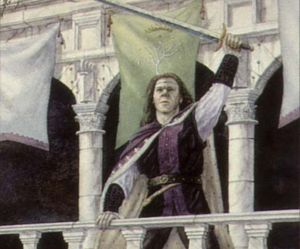 Return of the King by Rob Alexander

In T.A. 3019, the kingship of Gondor was restored in the person of Aragorn, who was the hidden descendent of Isildur. Aragorn was also a blood descendent of Anárion via the marriage of his ancestor Arvedui to the Gondorian princess Fíriel. Aragorn, taking the regnal name Elessar, reestablished the kingship of Gondor before going on to refound the realm of Arnor as well, thus recreating the Reunited Kingdom. Elessar's new royal house would henceforth be known as the House of Telcontar. Elessar would rule until Fo.A. 120, before passing the rule of the kingdom to his son Eldarion.

The King was the ultimate commander of the armies and navies of Gondor. For example, King Eärnil II sent his son Eärnur as the leader of the army who defeated the Witch-king of Angmar. The King would also be in charge of building projects, such as creating fortifications.[5] The King served as the ultimate arbiter of justice in court matters.[6] The King would have the ability to forge diplomatic alliances and both administer and renew oaths.[7] The King was the only one invested with the ability to invoke the name of Eru, though this power was seldom used.[8] Finally, the King had the legal right of using the palantíri available to him in places such as Minas Ithil. He could also invest others to do this on his behalf if the situation required it.[9] However, this practice ended when Sauron gained control of the Ithil-stone, for fear that he might work evil with it.[10]

The King appointed a Steward who would help in both the running of the King's affairs and ruling in the King's stead if he was incapacitated or otherwise away from the kingdom.[11] There was also a Council of Gondor who advise the King, though the full extent of the council's powers remains unclear. The Council retained enough authority to block the attempt of Arvedui, last king of Arthedain, to be named King of Gondor, even though he technically met the requirements. Earnil would be named in his stead.[12]

Part of the tradition associated with the King was that he was the only one who knew the location of the Tomb of Elendil. This burial ground was used as a place of secrecy or meditation by the Kings, and they were sworn not to let the location of it be known. It would remain secret until the days of the Stewards.[13]

The kings of Gondor had a crown used as a badge of office. They also would set in a great throne in the White Tower, a tradition respected even during the time of the Ruling Stewards, who did not sit on the King's throne.

Elendil, son of Amandil, reigned titularly as High King from S.A. 3320 – 3441 while his sons Isildur and Anárion were the co-rulers of Gondor itself until Anárion's death in S.A. 3440

For a detailed family tree of the individual Kings of Gondor until Eärnur, see: House of Anárion.

"King of Gondor" was translated as Aran Ondóreo in Quenya,[14] and Aran Gondor in Sindarin.[15]

Ancestry of the Kings of Gondor

Kings of the Dúnedain