"Her robe was blue as summer skies,
but grey as evening were her eyes;
'twas sewn with golden lilies fair,
but dark as shadow was her hair."
― Lay of Leithian, Canto I, vv.27-30

Lúthien Tinúviel was the only daughter of King Thingol of Doriath and Melian the Maia. She was said to be the fairest maiden to have ever lived (a description later shared also by Arwen). She wedded Beren, a mortal man, turning her back on immortality. 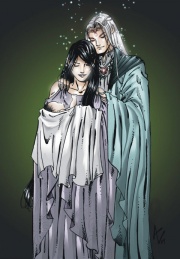 Birth of Luthien by Alice Falto

Lúthien was born during the Years of the Trees, at the end of the first age of the Chaining of Melkor. She was born in the Forest of Neldoreth under the stars, and niphredil first grew at the moment of her birth.[2]

She would often dance in the woods, while her friend Daeron, the minstrel of Thingol, would play his flute. Daeron came to love her, and while she enjoyed his company, she did not return his love.[1]

Encounter of Beren and Luthien by Elena Kukanova

During such an occasion she was discovered by Beren as he wandered the woods of her father's kingdom, and instantly fell in love with her. Daeron chirped out a warning, and she hid. While he searched for her, he accidentally laid his hand on her arm. He caught her alone some months later, and they grew to love one another. When Lúthien took Beren before her father, he was appalled that his royal daughter should wish to wed a mortal, and as is recounted in the Lay of Leithian so set Beren what he thought was an unachievable task, to recover a Silmaril from the Iron Crown of Morgoth himself. So Beren left Doriath in pursuit of his hopeless quest. 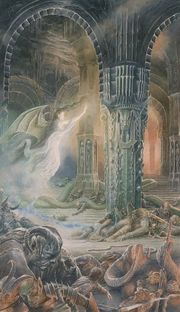 Fluttering before his eyes, she wound a mazy-wingéd dance by Alan Lee

After a time, a darkness fell on Lúthien's heart, and she learned from her mother Melian what this meant; Beren had been captured by Sauron, and was held in the dungeons of Tol-in-Gaurhoth. Though Thingol sought to stop her, Lúthien set out from Doriath to rescue Beren, if she could. Passing through many adventures, she gained the help of Huan the Hound, and together they came to Sauron's Isle. She nearly fell to the force of Sauron's hatred alone, but through her magic and Huan's strength they defeated Sauron and rescued Beren. Eventually Beren set out for Angband once again, but this time Lúthien accompanied him.

Through Lúthien's powers, they passed the gates of Angband, and the great wolf Carcharoth that guarded them. Coming before the Dark Throne itself, Morgoth prepared to have both of them captured and killed, but Lúthien wove a spell and conducted a dance that put even Morgoth and his court into a deep sleep, and Beren cut a Silmaril from the Iron Crown. Returning to the gates, they found that Carcharoth barred their escape. Lúthien had been drained of her strength after putting the slumber over Angband and could not fight against the werewolf. Beren held up the hallowed jewel to protect them, but the monstrous wolf bit off his hand and, with it, consumed the Silmaril. But the Silmarils were blessed by Varda herself, so that any unclean flesh that touched them would be withered and burnt. The wolf's innards were consumed with that burning, and it ran howling into the south. Before the servants of Morgoth awakening beneath the mountains could pursue them, three Great Eagles came to the aid of Beren and Lúthien, bearing them away from Thangorodrim.

Lúthien healed Beren, and they came at last back to her father's halls at Menegroth. There they heard tidings that the maddened wolf had entered Thingol's realm, and Beren set out with the King to the Hunting of the Wolf. After nightfall they returned; the wolf was slain and the Silmaril recovered, but Beren and Huan both were wounded mortally. Both passed away shortly after returning, and soon after Lúthien too wasted of grief.[1] 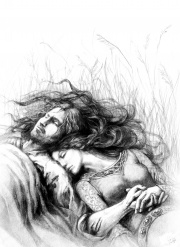 Their spirits were gathered in the Halls of Mandos in the Uttermost West, and there Lúthien sang a song of such extraordinary power and beauty that it moved even the implacable heart of Mandos himself. So she was granted a unique fate, to become mortal and return to Middle-earth with Beren, where they dwelt for a time in happiness on the green island of Tol Galen in the River Adurant.[1] The lands surrounding the isle were later known as Dor Firn-i-Guinar, "Land of the Dead that Live".[3]

After the destruction of Doriath Beren participated in battle for the last time. He ambushed the routed dwarves, and in the process also acquired the Silmaril he once took from Morgoth's crown. He brought the Silmaril, which was inside the Nauglamir, to Lúthien, and she wore it until the day she and Beren died of old age. It is said that their deaths came quicker than expected because of the Silmaril. After their death, the Silmaril was passed to their son Dior, which caused the Second Kinslaying.[4]

Among the Children of Ilúvatar the final death of Beren and Lúthien is accounted in F.A. 503 for in that year Dior received the Silmaril in Doriath, and it was taken as a sign of his parents' death.[5] In truth the date of their death is unknown, for none saw them leave the world or marked where their bodies lay.[6]

Lúthien is a Sindarin name meaning "Daughter of Flowers". The first element in the name is lúth ("blossom, inflorescence").[7] The second element is the feminine suffix -ien ("daughter").

Lúthien was largely inspired from Edith Bratt and when she died, Tolkien asked his son Christopher to include Lúthien in her gravestone, as he considered her "my Lúthien."[11]

I never called Edith 'Lúthien' – but she was the source of the story that in time became the chief pan of the Silmarillion. It was first conceived in a small woodland glade filled with hemlocks at Roos in Yorkshire (where I was for a brief time in command of an outpost of the Humber Garrison in 1917, and she was able to live with me for a while). In those days her hair was raven, her skin clear, her eyes brighter than you have seen them, and she could sing – and dance. But the story has gone crooked, & I am left, and I cannot plead before the inexorable Mandos.
—Letter 340

The tale also shares the common element of folktales with the disapproving parent who sets a seemingly impossible task for the suitor, which is then fulfilled. The Welsh tale of Culhwch and Olwen is one such story.

The travel of Lúthien to Mandos and softening Námo with her song, in order to release her beloved, is a usual theme in mythology and religion: the Greek tale (as told by Ovid) of Orpheus and Eurydice (see also the poem Sir Orpheo, a medieval retale), the Japanese myth of Izanagi and Izanami, the Akkadian/Sumerian myth of Inanna's descent to the Underworld, the Mayan myth of Ix Chel and Itzamna or the Indian legend of Savitri and Satyavan.

In a crossed out note, she returned to the Eldar with her brother Timpinen while their father never did.[12]

When the story of her love with Beren first appeared in the Lost Tales, Tinúviel was still her only name and Dairon was her brother.[13] The idea that the name Tinúviel was given to her by Beren emerged in the early Lays of Beleriand, along with her birth name Lúthien (although at first Tolkien tentatively gave her the birth name of Melilot).[14]

In some of the earlier writings, the story of Beren and Tinúviel was slightly different. Instead of encountering Sauron on Tol Sirion, Tinúviel rescued her lover from the hands of Tevildo, Prince of Cats. Tevildo, however, was written out of the plot, and replaced with Sauron.[15]

Before this name was assigned to the elf-maid, the name Lúthien was connected with Luthany, the Elfin name for England.[16]:313 In several very early drafts of unfinished stories, Lúthien was the Elfin name of Ælfwine, translated first as "wanderer" and later as "friend".[16]:301-304