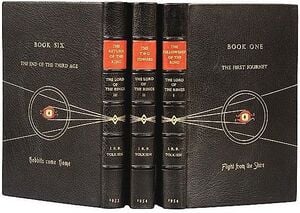 Peter Alford's set of The Lord of the Rings

Pieter Collier has noted that Peter Alford was a bookbinder, who had written to Tolkien asking for permission to bind his Lord of the Rings set with his own sub-titles. Tolkien approved but also detailed his preferred titles:

I think your own choices may stand. The only real divisions are, of course, the 'books'. It may interest you to know what the titles were to have been, before the decision to publish in three parts.

The alternative or sub-titles in brackets would have been abandoned, I think."

Alford's set (sold by Sotheby's for GBP 32,450 in December 2001) included the following note by Tolkien:

"The titles of the six Books, the only proper division of The Lord of the Rings were those originally devised before its publication in three parts. Peter Alford has my approval of his own choice of sub-titles on his bindings. J.R.R. Tolkien".[3]