"O Lórien! The Winter comes, the bare and leafless Day;
The leaves are falling in the stream, the River flows away.
O Lórien! Too long I have dwelt upon this Hither Shore
And in a fading crown have twined the golden elanor."
― Galadriel's Song of Eldamar

Lothlórien was a kingdom of Silvan Elves on the eastern side of the Hithaeglir. It was considered one of the most beautiful and "elvish" places in Middle-earth during the Third Age, and had the only mallorn-trees east of the sea.

The first inhabitants of the forested area later known as Lórien were a group of Nandor that refused to cross the Hithaeglir.[2] Lórien was probably one of their scattered settlements in the area. Later, however, as the power of the Longbeards of Moria grew, they relocated to the western side of the Anduin, across the Nimrodel. The land in which they dwelt (the forest east of the Hithaeglir, above Fangorn and below Mirkwood) became known in the Silvan tongue as Lórinand, or Laurelindórenan.

Following the destruction of Beleriand and the War of Wrath, most of the Noldorin exiles and remnants of the Sindar retreated to Lindon and many refused the invitation of The Valar. One of the unwilling was Amdír.[3] He, along with his son Amroth, established himself in Lórinand, where he would soon lead the princeless Silvan Elves.[4] The arrival of the Sinda Amdír affected the Nandor of Laurelindórenan. He took over as their King, while another Sinda, Oropher, became King of Greenwood the Great. Their language was replaced by Sindarin. [5]

Celeborn, a Sindarin elf, dwelt with his Noldorin wife Galadriel in Eregion. They made contact with the Galadhrim and before long they passed through Moria and arrived in the woods. Before the Fall of Eregion and the death of Celebrimbor, Nenya, one of the Three Rings of the Elves, was delivered to Galadriel.[6] Other survivors of Eregion, including many Noldor and Sindar, escaped into Khazad-dûm and were granted passage by their friends the Dwarves, coming eventually through the Misty Mountains to the woodland.[7]

As Sauron's power grew over the Westlands, King Amdír marshalled the Galadhrim to the War of the Last Alliance where many fell in the Dead Marshes along with their King.[5]

The survivors, which included Amdír's son Amroth, returned to Lórinand. Amroth was the new King, but he was tired of Middle-earth, and wished to go West and seek Valinor. When Moria fell to evil in T.A. 1981, many of the Galadhrim fled south. Amroth also departed with his beloved, Nimrodel, and they were never seen again.[8]

After Amroth and Nimrodel had passed away, Celeborn and Galadriel took the title of Lord and Lady of Galadhrim.[6] With Nenya, the land was kept pure and alive, and evil was not permitted to penetrate it. They moved back to the western side of Anduin and built Caras Galadhon, the great centre of the woodland kingdom. There Galadriel planted the seeds of the mallorn trees that were given to her by Gil-galad when she lived in Lindon, where they couldn't grow.[9] It was because of the mellyrn that Lothlórien became known as the Golden Wood thenceforth.[10] Lothlórien was filled with light and life, and became beautiful, and by the power of the Elven Ring the trees did not die.

Under the Lord and Lady, Lothlórien prospered for more than a thousand years as time passed without decay under the golden boughs. Celeborn and Galadriel produced a daughter, Celebrían, who married Elrond, and their granddaughter Arwen Undómiel was considered the fairest of the elven race at that time.

In T.A. 3017, Aragorn passed by Lothlórien with the captured Gollum to deliver him to Mirkwood. Gandalf got word from Lothlórien on his way to the Shire, and he changed his course to go and meet them.[11] 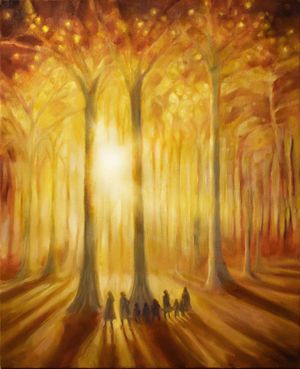 The Fellowship in Lothlorien by Anna Kulisz

But as the Third Age came to an end, troubles at last began to touch the Valley of Singing Gold. As the shadow of Sauron lengthened and the War of the Ring raged, the border-wardens came across the remnant of the Fellowship of the Ring, a group of travellers on a quest of immeasurable importance. Among the company were Aragorn, a prince of the Dúnedain and a friend of the Lady, as well as Legolas of Mirkwood. The only reservation the border-wardens had about them was the dwarf, Gimli.[12] The Fellowship were led blindfolded for a time, but at Galadriel's word their blindfolds were released and they were taken to Caras Galadhon on 17 January T.A. 3019.[13] The very night the Fellowship arrived, a band of Orcs crossed the Nimrodel. A regiment or so of the Galadhrim were sent out, and destroyed the Orcs.[12]

There the Elves learned of the death of Gandalf, and Galadriel knew what evil had been brought into the Golden Wood. She revealed her own ring to Frodo, and showed him her mirror.[14] Then the Fellowship was furnished with new supplies and sent off down Anduin, bearing the gifts of the Lord and Lady.[15]

Right when the Company left, Gwaihir brought Gandalf to the Golden Wood, who was recovering from his battle with Durin's Bane. He was healed, clothed and given a new staff before leaving for Fangorn.[16]

But the coming of The One Ring was only the beginning of their troubles that were the heralds of greater conflicts that were to occur. Sauron unleashed massive attacks on the Golden Wood.

On 11 March, forces from Dol Guldur swarmed into the forest in a full-scale assault. By the power of the Wood-elves and Galadriel’s ring, they were repulsed. The second wave came on 15 March, at the same time as the invasion of Mirkwood. Again, the enemies were forced out. The third and last attack was made seven days later, on 22 March. They caused much destruction on the wood's borders, but the valiant Galadhrim routed them utterly. And after the Shadow of Sauron was lifted, they stormed Dol Guldur and cleansed Mirkwood; Thranduil gave its southern part into the dominion of Lothlórien, and it was called East Lórien.[13]

On their way to Gondor, Elrond and Arwen came to Lothlórien on 20 May.[17] 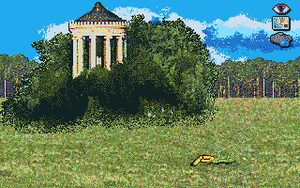 Only two-and-a-half years after the War of the Ring, Galadriel, the Lady of Lórien, took ship West to Valinor.

The eastern border of Lothlórien in the southern Eryn Lasgalen became East Lórien. It was founded after the cleansing of Dol Guldur during the War of the Ring, and Celeborn ruled the Galadhrim of Lothlórien. In the Fourth Age, he grew weary and left for Rivendell, leaving the wooded land of East Lórien populated by only a few wandering Silvan Elves.[18]

In Fo.A. 121, a grief-filled Arwen Undómiel travelled to Lothlórien, now fully abandoned, after Aragorn surrendered his life, surrendering her own life upon Cerin Amroth. "[T]here is her green grave, until the world is changed, and all the days of her life are utterly forgotten..."[19]

Lothlórien stood between the south-eastern end of the Misty Mountains and the great river Anduin. The river Celebrant ran through the wood from its source in the mountains to the west through to the Anduin to the east.

In its earlier days, the woods of Lothlórien extended south into Fangorn Forest. In these days there was no true border between the two territories, though after conversation between Treebeard and the King of the Golden Wood it was agreed that the inhabitants of either land could walk freely at their leisure across whatever borders there may be.[20] It is also possible that the woods of Lórien extended into the southern regions of Greenwood the Great, though there is only a small amount of evidence supporting this possibility.[21] By the Third Age, Lórien was separate from Fangorn in the south and Mirkwood in the east by many miles.

Lothlórien, said to mean "Lórien of the Blossom", is a compound of Sindarin loth + Quenya Lórien ("?Dream Land"). Treebeard translates the name as "Dreamflower".[22]

Lothlórien was often shortened to Lórien, or the Golden Wood (referring to the golden mallorn trees that grew in that land).[22][23] Other names recorded for the region were:

In the drafts of The Lord of the Rings Tolkien was unsure whether time of the outside world "froze" while the Fellowship stayed in Lórien, changing his mind twice; according to the first scheme the Fellowship had left Lórien and passed Sarn Gebir already on 21 January. Eventually he decided that time passes normally, and had to adjust the dates and the routes of the characters, later changing their departure to 14 February and eventually 16 February (taking into account the full moon of 7 March).[26] In the published book, the characters instead have lost their subjective sense of time after leaving Lórien.

Lórien is one of the several battlegrounds in this game. The trees are just normal trees.

Lórien was portrayed as a golden wood filled with sunshine during the day and Caras Galadhon as a city of moonshine and stary blue lanterns at night.

After defeating the Balrog, the Fellowship enters Lothlórien. There are no missions; stepping towards a ladder triggers the Mirror of Galadriel-scene and continues the game.

In the Good Campaign, Lothlórien (along with the Fellowship) is attacked by several waves of orcs and trolls. The area is full of treasures, which form the only income needed to make elven archers. 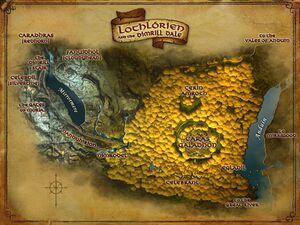 Map of Lothlórien from The Lord of the Rings Online.

Similar to The Battle for Middle-earth, a skirmish takes place after Fellowship's arrival in Lothlórien. Player's goal during the mission is to protect two mallorn trees from attacks for a certain period of time.

Lothlórien makes appearance as a Battleground in both "Evil" campaign and skirmish model. The layout of the map drastically differs from the ones in the game-predecessor.

Lothlórien is one of major regions of the game, added following the The Lord of the Rings Online: Mines of Moria expansion. It is inhabited by over a hundred of non-playable characters, who are involved in hundreds of various quests. The map shows the major landmarks of the area: The Mirrormere, rivers Anduin, Nimrodel and Celebrant, Cerin Amroth and Caras Galadhon.