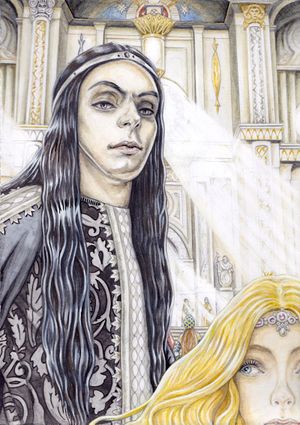 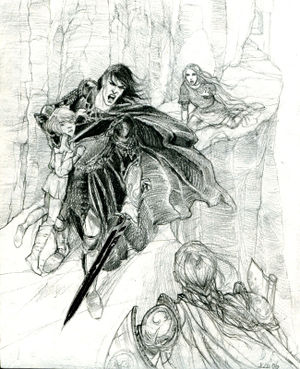 Seven years later, the armies of Melko approached Gondolin and Turgon called a council. All the lords supported Tuor, who wanted to leave the city and save the women and children, but Meglin and Salgant alone convinced Turgon to hold the city and guard the treasures, and while he spoke Salgant backed him up.[9]:175-6

When the Fall of Gondolin began at the northern gate, Meglin led his folk to Tuor's house at the south of the city. He knew of Idril's secret way and wanted to use it for his own porposes. There he tried to kill Eärendel throwing him from the walls, and dragged Idril of her hair to make her see it. But Eärendel and Idril fought him, delaying him. Tuor soon arrived with his folk of the Wing. But a press of the Mole-folk was in front of the house, and these were the grimmest Noldoli that Meglin could get, doing nothing to stop their lord. Then the folk of the Wing attacked and the folk of the Mole was stricken asunder, and Tuor could run upon Meglin. When Meglin saw this, he stabbed Eärendel, but the child was wearing a coat, and Tuor broke Meglin's arm. Finally, Tuor took Meglin and flung him far out. The body smote Amon Gwareth three times before reaching the flames, "and the name of Meglin has gone out in shame from among the Eldar and Noldoli".[9]:177-8