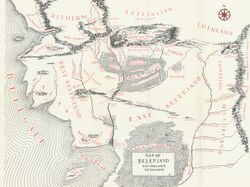 The Map of Beleriand and the Lands to the North, appearing in the The Silmarillion, depicts the region of Beleriand.

The map is a redrawing by Christopher Tolkien from J.R.R. Tolkien's "Second 'Silmarillion' map", which was divided on four sheets and which was the last map of Beleriand that John Ronald made (the "original" maps, without alterations, were reproduced in The Lost Road).[1] However, Tolkien continued to add and change names or features on the map manuscripts; these were reproduced by Christopher in The War of the Jewels.[2]

One of the errors Christopher admitted, was the portrayal of the spring(s) of the rivers Esgalduin and Aros; in the original map, the river shared the same source.[3]