Difference between revisions of "Meneltarma" 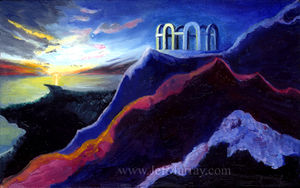 Jef Murray - At the foot of the Meneltarma

Meneltarma (pron. [ˌmenelˈtarma]), was a sacred mountain in the centre of Númenor.

The mountain, also known as the Holy Mountain, was sacred to the Númenóreans as a holy place devoted to Eru Ilúvatar. A requirement of absolute silence was imposed on any who climbed the mountain. The tradition was so strong and universal that even foreigners felt bound by it. Only the King was allowed to utter prayers and thanksgivings to Eru Ilúvatar, during the feasts of Erukyermë, Erulaitalë and Eruhantalë.

Birds and animals did not approach the site, and only the Eagles of Manwë were seen circling over the summit. They were also regarded as sacred guardians of the mountain and all the land.

Meneltarma was the highest peak of the island. It stood at the centre of the island, geographically in the inland regions called Mittalmar.

The base of Meneltarma sloped gently and divided itself into five roots reaching out towards the five divisions of the land. These roots were called Tarmasundar, the Roots of the Pillar, gentle grass-covered highlands. On the southern slopes were located the tombs of Kings and Queens of Númenor, in a valley called Noirinan.

However, near the summit the slopes became more vertical and could not be ascended easily. The kings later built a spiral road to the peak, beginning at the southern tip of the mountain and winding up to the lip of the summit in the north.

Meneltarma had a flattened and somehow depressed summit, which was so broad that was able to contain a great multitude during religious ceremonies. However no permanent structure was erected there, and the ceremonies took place in open air. It was said that on a clear day the 'far-sighted' might see Tol Eressëa.

After the destruction of Númenor, some amongst the Exiles believed that the summit of the mountain remained as an isle in Belegaer. Some Dúnedain are even said to have set sail trying to reach the isle, from which the legend held that one could catch a glimpse of the unreachable Aman.[1][2]

The name Meneltarma is Quenya and means "pillar of heaven",[3] from menel and tarma.