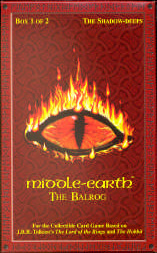 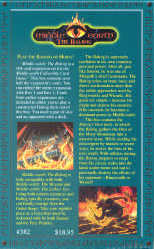 Middle-earth: The Balrog (MEBA), released in 1998, was an expansion set for MECCG.

MEBA adds a new sub-faction to the minions, Balrog, who mainly depends on the brute strength of his Orcs and Trolls. It is argued by the player base that since the production of MECCG ended after MEBA, the set remains a bit overpowered because it didn't get a "balancing set" published afterwards.

MEBA was sold as two boxes, each containing one deck. Buying both of them would yield a complete set, a format different from all other expansions. Deck 1 (red box) was called The Shadow-deeps; deck 2 (green box) was called Balrog's Host. Each box contained over half the expansion's cards. Grey bordered reprints of cards from earlier expansions were included to allow playing the decks right out of the box.