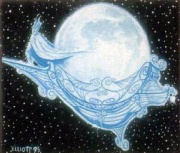 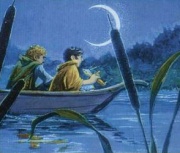 The phases of the Moon were explained that: first, like earlier Silpion, the Rose needed to be watered with its shining dew and created it in greater quantities, and the heavy dew had to be removed; second, the Moon had to stay within the lower layers of Ilwë and the winds made it wobble.[22]

Silmo wanted to steer the Moon but could not do it and so Manwë appointed Ilinsor, who was joined by other air spirits. The Man in the Moon is even described in those writings, as being an old Elf who secretly hid on the island of the Moon, and built his minaret there.[22] This is alluded to further in Tolkien's Roverandom, where the Man in the Moon also lives in a Minaret. 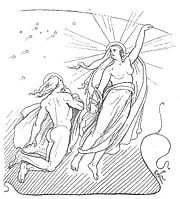