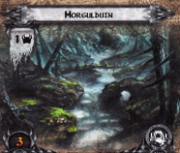 Morgulduin in The Lord of the Rings: The Card Game

The Morgulduin was a river of Gondor that began in Morgul Vale in the Ephel Dúath. It ran westward past Minas Morgul until it reached the Cross-roads in Ithilien, where its course turned southwest until it entered the Anduin just south of Osgiliath. Just to the north of the stream was the road from Osgiliath to Minas Morgul.[1] It is probable that the original name of the river was Ithilduin[2] and that it was renamed to Morgulduin at the same time when Minas Ithil was renamed to Minas Morgul after it was captured by the Nazgûl.

As Frodo, Sam, and Gollum were approaching the Cross-roads they heard the voice of the river, which sounded cold and cruel.[3] The river was polluted - near Minas Morgul a cold steam issued from the river whose stench and vapours sickened the hobbits.[4]

It has been suggested that Morgulduin is a Sindarin name meaning "black magic river" and consisting of mor(n) ("dark", "black"), gul ("magic", "necromancy") and duin ("river").[5]

Ithilduin is a Sindarin name. Its meaning ist not glossed, but Roman Rausch suggests that it means "moon-river" and consists of ithil ("moon") and duin ("river").[6]

In a note on an earlier map drawn by J.R.R. Tolkien the Morgulduin was called Ithilduin or Duin Morghul.[2]