Morwen was a daughter of Baragund of the House of Bëor, the wife of Húrin of the House of Hador, and the mother of Túrin Turambar, Urwen, and Nienor. She was described as being the most beautiful mortal woman of her time - tall, dark-haired, bright-eyed, and extremely majestic. She also had a stern and cold disposition. Her son Túrin, but not her daughters, inherited her beauty and her tendency to keep her emotions and thoughts to herself.[1]

Morwen was the daughter of Baragund, Lord of Ladros. She belonged to the House of Beor and married Húrin of the House of Hador and Lord of Dor-lómin. They had three children together, Túrin, Urwen, and Nienor. Urwen perished to the Evil Breath, a plague of Morgoth, when she was a young child.

After Húrin's departure to fight for Fingon at the Nirnaeth Arnoediad, Morwen, who was pregnant with their third child, remained in her husband's house as the Lady of Dor-Lómin. After Morgoth's victory at the Nirnaeth, hordes of Easterlings who had betrayed the Edain, invaded Hithlum. Even though they took control of the land, they left Morwen and her household alone for a while, as her incredible beauty led them to believe her to be a witch with dealings with the Elves. She was indeed in contact with small groups of Elves living in the mountains close to her house, but from them she received only information, and that very scant.

Eventually she thought it best to send her only surviving child, Túrin, to Doriath with Gethron and Grithnir to seek refuge. Being pregnant, and out of fear of drawing the Easterlings' attention, Morwen herself remained in Dor-Lómin.

Túrin was adopted by King Thingol, who sent messengers back to Hithlum bringing her news about Túrin's well-being, invitations from Thingol and gifts from Melian. But she refused to leave her home, not the least because her daughter Nienor was still a baby.[1] In her stead she sent to Túrin the dragon-crested Helm of Hador, the heirloom of their house.[2]

Morwen's house was oppressed by Brodda's Easterlings. Meanwhile, Túrin had exiled himself out of Doriath and made himself a hero. The fame of the Black Sword reached to Hithlum, saying that he was cleansing Beleriand from perils, without Morwen knowing that he was her own son. Nienor now had grown up, and Morwen eventually fled the tyranny of Hithlum through Ered Wethrin and came to Doriath, only to find out that her son had left.[3] Túrin's travels also brought him to the north and liberated Dor-Lómin, but it was too late, as Morwen and Nienor had long gone.

Elves of Nargothrond came to Doriath, bringing news about its sack by Glaurung and that Túrin was under Orodreth's service in Nargothrond; hearing this, against Melian's counsel Morwen left Doriath to seek news of him. Mablung and march-wardens were tasked to accompany her; unknown to both, Nienor had joined them. Mablung reached her near Sirion but Morwen refused to hear him; then Nienor revealed herself and both women tried to persuade each other to return.

As Morwen refused to go back, and Nienor wouldn't abandon her mother, Mablung perforce passed them over the Meres of Twilight and left the women with guards upon Amon Ethir before setting out with a small company to scout Nargothrond as were his orders by Thingol. Yet Glaurung left Nargothrond and Mablung was unable to prevent them both from getting ensnared in the traps of the Dragon.

Morwen was then lost in the fog that arose from the Dragon's steamy breath and Mablung heard no news from her.[4] 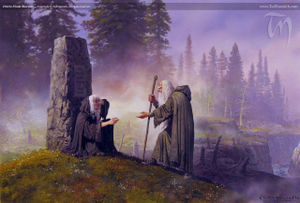 Years later, Morwen, now in her fifties, came to the Forest of Brethil and found the graves of her children at Cabed Naeramarth. Húrin found her there. She was dying, and asked her husband how their son found his sister; but Húrin never replied. They spent the evening together until she passed away at sunset. Húrin dug for her a grave above Cabed Naeramarth on the west side of the Stone of the Hapless cutting the words Here lies also Morwen Eledhwen.

According to the words of Glirhuin, the mound survived the War of Wrath and as Tol Morwen was the westernmost isle off the coast of Lindon in the Second and Third Ages.[5]

She bore the title Lady of Dor-lómin, being the wife of Húrin, the Lord of Dor-lómin.[10]