Mushrooms were an edible fungus. It is said that Hobbits have a passion for mushrooms, surpassing even the greediest likings of Big People.[1]

Mushrooms were a particular delight of young Frodo Baggins, who would often steal them from Farmer Maggot's fields. Old Maggot still remembered it when Frodo came to his farm years later, and as a parting gift, Mrs. Maggot gave Frodo a basket of the prized mushrooms.[1]

J.R.R. Tolkien described himself as a Hobbit in all but size, noting that he was very fond of mushrooms.[2]

In a note discussing the Drúedain, Tolkien made mention about the fungi in the First Age: they were generally considered ugly and dangerous by the Elves and most of the Edain, and the less wise called them "ork-plants", believing them cursed and blighted by Morgoth. The Eldar did not eat them and only a few Edain knew how to distinguish the edible ones and could eat them because of great hunger when lost in the wild. The Drúedain had a lore of plants and ate fungi with pleasure (to the astonishment of the other peoples), and they cultured their favorite ones. They passed this knowledge to the Haladin who ate them when guests out of courtesy, and resolved to them at need. Tolkien later discarded the note believing that this trait made the Drúedain "too like Hobbits".[3] 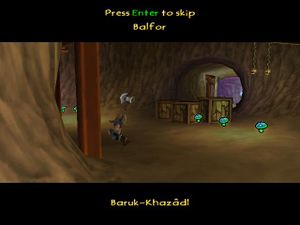 Though the scenes in Maggot's house have been omitted, a nod to mushrooms is given when the four Hobbits escape Farmer Maggot. Pippin spots them after a comment on a "short cut", making the full phrase sound as "A short cut to... mushrooms!", the chapter title.[4]

Mushrooms are collectible items found throughout the Shire. When ate, they restore 10 points of the player's health.[5]

Mushrooms serve as power-ups throughout the game. One mushroom - green and blue of colour - restores one health bubble.[6] Later in the game, larger, clustered mushrooms serve as a full healing item.[7]

During the White Council Saruman, in order to dismiss Gandalf's fears about the Necromancer, mentions that Radagast consumes mushrooms excessively, which have blurred his cognition and judgment.