Revision as of 13:52, 22 October 2022 by Akhorahil (talk | contribs) (→‎History of composition: Added that he offered in a letter from 1954 to Naomi Mitchison to have a typed copy made of The Rings of Power)
(diff) ← Older revision | Latest revision (diff) | Newer revision → (diff)

Of the Rings of Power and the Third Age is the fifth and last part of The Silmarillion, edited by Christopher Tolkien from his father's later texts. 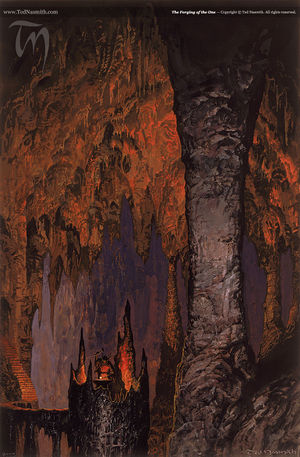 The work is a historical essay dealing with the preamble to the events described in The Lord of the Rings, and the events themselves, in the style of The Silmarillion or the Appendices.

In a letter to Katherine Farrer from possibly 1948, J.R.R. Tolkien planned to send her a copy of a text he called "Rings of Power" which he described as, along with the "Fall of Númenor", the link between the Silmarillion and the "Hobbit world".[7] He also mentioned in a letter to Milton Waldman that was probably from late 1951 that the three main themes of the Second Age are dealt with annalistically and in the two tales The Rings of Power and The Downfall of Númenor.[8] J.R.R. Tolkien offered Naomi Mitchison in a letter from 1954 to have a typed copy made of material called The Rings of Power if she wanted.[9]