Of the Ruin of Beleriand and the Fall of Fingolfin is the eighteenth chapter of the Quenta Silmarillion section within The Silmarillion. 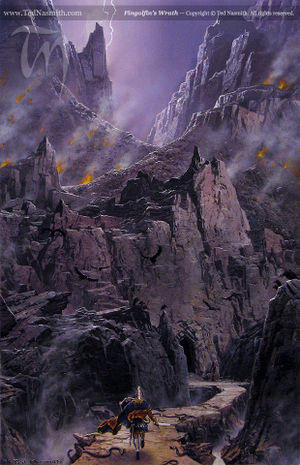 After the tribes of the Edain had entered Beleriand and strengthened the forces of the Noldor, Fingolfin began trying to rally the Noldor and Edain together for an attack against the fortress of Morgoth. He was met with resistance, however, for the Noldor had grown complacent, loving their new realms and power. They were also fearful of the wrath of Morgoth, knowing that even a victory would come at heavy cost.

At last, during winter, Morgoth attacked the Noldor. Great fires erupted out of the Iron Mountains and burned the great plains of Ard-galen, forever scarring them into a vast desert. Many Noldor were killed in the blaze, which reached as far down as Dorthonion before stopping.

Great armies poured forth from Angband as well, led by the great dragon, Glaurung. The combined strength of these armies was enough to break the power of the elves, ending the Siege of Angband forever.

Many of the Sindar fled to the realms of Doriath or Ossiriand. Others took refuge in the realm of Nargothrond. The king, Finrod Felagund, went north to aid his brothers Angrod and Aegnor. But he was too late, as they were both killed. And he himself soon came into peril, being saved only by the timely intervention of the man Barahir of the house of Beor, who intervened at the Fen of Serech to stop the Orcs. Finrod gave Barahir his emerald eyed ring in gratitude. and swore to aid the house of Barahir should they need it.

In the northwest, Hithlum was hard pressed by the Orcs as well. Hador Golden-head was slain, leaving his house to his son Galdor. Due to their strength, and the strength of the Elves, Hithlum remained in the face of Morgoth's attack. But they were cut off from the rest of the Elves by legions of Orcs.

The Sons of Fëanor suffered a catastrophic defeat as well. Celegorm and Curufin were driven to seek refuge in Nargothrond. Maedhros led a defense and stopped the Orcs for a small time, but soon Glaurung attacked and opened Maglor's Gap, forcing the Fëanorian elves south. Caranthir, Amrod, and Amras were all driven south and joined with the Green-elves of Ossiriand. Maedhros and Maglor eventually joined on the hill of Himling and defended against the onslaught as best they could.

Word would reach Fingolfin of all of these catastrophes, causing him to perceive the complete devastation of the Noldor. In madness and grief, he mounted his horse and rode out from Hithlum across Dor-nu-Fauglith. His rage was so great that he was mistaken for Oromë, the huntsman of the Valar. Fingolfin rode up to the very gates of Angband, challenging Morgoth to single combat.

Fingolfin openly insulted Morgoth, calling him a coward and a tyrant. Morgoth had no choice but to answer Fingolfin's challenge, lest his own captains think him unfit to lead. Taking the great hammer of the underworld called Grond, Morgoth emerged from the black depths of Angband and attacked Fingolfin.

Fingolfin's great sword Ringil wounded Morgoth seven times, and whenever Morgoth attacked, Fingolfin would leap out of the way, causing the great hammer to leave a massive rend in the earth where the elf-king once stood. This duel raged on, and the forces of Morgoth quailed, their cries filling the North.

But Fingolfin was an Incarnate, and Morgoth was an Ainu. Fingolfin could grow tired, where as Morgoth did not, so at last, his strength failed, and Morgoth struck Fingolfin, smashing him with his great hammer. Morgoth placed his boot onto Fingolfin, intending to crush him to pieces, but with his last stroke, Fingolfin stabbed the foot of Morgoth with Ringil. The hurt was so great that Morgoth would limp forever after, and the pain of his wounds would never subside.

Fingolfin died after this, but Morgoth could not even exact revenge, for Thorondor swept down from the heavens and clawed at his face, scarring it forever. Thorondor grabbed the king's body and flew away, taking it to Gondolin, where Turgon would build a great cairn (or tomb) that no Orcs could ever pass by while Gondolin endured. Fingolfin would be succeeded by his son Fingon as High King of the Noldor.

Morgoth's wrath would turn to the men with Barahir. Barahir fought the Orcs for all of the land he had, but the fight was soon desperate enough that his wife Emeldir took the women and children and fled to Brethil. Barahir became an outlaw, leading a band against Morgoth along with his son Beren.

For two long years, the Noldor endured against Morgoth, defending the Pass of Sirion in the west. Orodreth was their leader, manning the tower of Minas Tirith. Their defense was broken by the greatest of Morgoth's servants, the powerful necromancer known as Sauron. He would turn the tower into Tol-in-Gaurhoth, a place of evil and dark sorcerery. This opened the passes for Morgoth, who sent his armies into Beleriand and captured all of the Elves he could. He would break their wills and bring them into his sway. He would also force them to man his great smithies and work his mines in Angband. This sewed distrust among the Elves for any escaped prisoners, who were suspected to be servants of Morgoth, willing or no.

Morgoth also tried to sway the Edain, but few among them would listen to him. This earned them his ire, and he would seek to destroy them.

At this time, the first Easterlings came forth into Beleriand. Many would swear allegiance to the Sons of Fëanor. Some such as Bor indeed were faithful, but others such as Uldor were secretly in the employ of Morgoth, but for now they were content to feign service to the Noldor. There was a rivlary between the Easterlings and the Edain, but the Edain suffered great losses. The House of Bëor was almost destroyed. The House of Hador was shut into Hithlum. The House of Haleth was spared at first, but they would soon face the Orcs before being saved by the coming of Beleg Strongbow, who helped them to defend the northern borders of Doriath.

At this time, two members of the house of Hador, Húrin and Huor, were living with the lord of the House of Haleth, as was the custom of Men. Both of these Men went to the battle with the Orcs who invaded Brethil. But their company was cut off, and they fled to the Ford of Brithiach. A mist arose from the river Sirion and hid them, and the great eagle Thorondor saw them and brought them before Turgon in the hidden city of Gondolin.

They won the heart of Turgon and learned much of the elves there. Yet after a year had passed, both Húrin and Huor desired to return to the battles with the Orcs and aid their fellow men. Turgon was reluctant to have them leave, but they swore oaths never to reveal the location of Gondolin. With that, Turgon allowed them to depart with the aid of Thorondor, such that they were unsure of the exact location of Gondolin.

Turgon, having learned of the events outside, began to send parties of Elves to the isle of Balar, where they created ships to sail west to the Undying Lands. Yet these ships never reached the Undying Lands, due to the curse of Mandos forbidding the return of the Noldor.

Morgoth's victory was great, but not complete. He could not learn the location of Nargothrond, and he knew nothing of Gondolin or the whereabouts of Turgon. In addition, he had underestimated the strength of his enemies and suffered losses himself, so that he could not wholly subdue his opponents. He recalled his forces back to Angband, and Beleriand was given a short reprieve for a while.

Within seven years, Morgoth renewed his attack against Hithlum. His forces attacked Ethel Sirion, killing Galdor, but they were driven back by his son Húrin. Fingon was also attacked, but was saved by the arrival of ships sent by Círdan the shipwright. Thus the lordship of Dor-lómin passed to Húrin.