One by one the stones vanished from public knowledge or were lost. The Osgiliath-stone fell into Anduin during the Kin-strife and burning of that city in T.A. 1437. When Arvedui, King of Arnor, was shipwrecked and his line ended in 1975, he drowned with the palantíri of Amon Sûl and Annúminas, the only communicating stones of Arnor. When Minas Ithil fell in 2002, its stone was assumed destroyed in general. The wiser and more foresighted men of Gondor decided that in case Sauron had seized the Stone, they would stop using the Anor-stone to prevent any contact with the Dark Lord. As the Elostirion-stone was locked away and could not answer the other stones anyway, the only remaining stone was the Orthanc-stone, which became useless to the Gondorians. When Beren gave Saruman the deserted but secure Orthanc in 2759, he likely assumed that Saruman, head of the leading order against Sauron, would keep it safe.[4]

Several of these hidden or lost stones came to light during the War of the Ring. Previous to this, Saruman used his palantír to gain knowledge, and eventually was ensnared through it by Sauron. Thus, the above war was greatly affected by these stones. Later, in the final weeks of the War, its rightful master Aragorn II wrested it to his will, so that it no longer had a connection with the stolen Ithil stone. [5]

The second palantír to be revealed was that of Minas Anor. Denethor, too, had glanced toward Mordor with it, but his great hate of incarnate evil and power of will prevented him from being snared, though it taxed him greatly. However, he saw only what Sauron wanted him to see, and partially because of this he eventually committed suicide in the darkest hour. It is said that afterwards, anyone of weaker will who looked into it would see only the writhing hands of Denethor in his final agony.[6] This stone was later used by King Aragorn II.[source?] 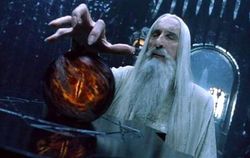 The purpose of the stones in general was dual: to communicate with one another, and to see afar.[4] Stones were linked with each other and each could reveal what was near another stone, but those of strong will and mind could direct their gaze anywhere, both in space and time (only towards the past).[2]

The Palantír of Orthanc appeared in a draft of the story unexpectedly. Tolkien already had in his mind the rhyme "Seven Stars and seven stones and one White Tree" and associated it with one of the "seven stones".[11][12]