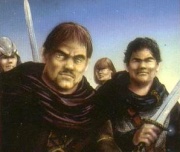 They were grim in appearance and were usually dressed in grey or dark green, with a cloak-clasp shaped like a 6-pointed star.

During the rule of Arassuil, the Orcs of the Misty Mountains became more bold, daring to invade Eriador. The Rangers fought many battles trying to hold them back, but one party managed to reach the Shire, and were fought off by a party of brave Hobbits under Bandobras Took in T.A. 2747. Soon after, the Long Winter arrived and many lives were lost. Gandalf came to the aid of the Hobbits, and with his help, many survived.[1]

In 2911, during Argonui's rule, the Fell Winter began with the Brandywine freezing over. This was a catalyst for White Wolves invading Eriador from the North. In the last year of his reign, great floods devastated Enedwaith and Minhiriath leaving Tharbad ruined and deserted.[1] The following years were peaceful although Arador was killed by hill-trolls and his son Arathorn II was killed while hunting orcs.[2]

Arathorn's son, Aragorn II succeeded him, who between 2957 to 2980 took great journeys, serving in the armies of King Thengel of Rohan, and Steward Ecthelion II of Gondor. Many of his tasks weakened Sauron and his allies, and the West endured him during the War of the Ring.[1][3]

Saruman, jealous of Gandalf, secretly followed Gandalf's interest for the Hobbits and put spies in Bree and Southfarthing. In the years leading up to the War of the Ring, his spies saw that the Shire was closely guarded by the Rangers. When Gandalf suspected that Bilbo Baggins possessed the One Ring the guard was doubled (perhaps at his request to Chieftain Aragorn). He also asked Aragorn to locate Gollum.[1] 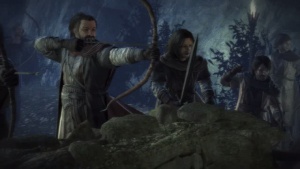 The Rangers of the North are called simply Rangers in the game. There were some scattered about Middle-earth, but there were also many who were organized. There was a group that Aragorn led to keep track of the Enemy's movement during "Stirrings in the Darkness". The main Ranger factions in the game are the Rangers of Esteldín, the Wardens of Annúminas, and later they merge into the Grey Company.

Retrieved from "http://tolkiengateway.net/wiki/Rangers_of_the_North"
Categories: Rangers | Dúnedain of the North