Difference between revisions of "Red Book of Westmarch" 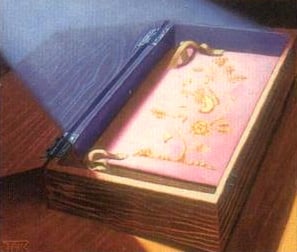 The first Red Book was written as a diary by the Hobbit Bilbo Baggins and recounted his quest for Erebor, which he called There and Back Again. Within it, he also compiled Elven lore while retired in Rivendell. He later gave the book to his kinsman and heir Frodo Baggins.

In addition to the memoirs of the two Hobbits, the book contained Bilbo's Translations from the Elvish, legends from the Elder Days, and various Hobbit poems. A lot of background information on the realms of Arnor, Gondor, and Rohan was added to it by Peregrin Took and Meriadoc Brandybuck from their contacts in Rohan and Gondor. Other material was provided by King Elessar.

After Bilbo and Frodo left for Valinor, the Red Book passed into the keeping of Samwise Gamgee, the Mayor of the Shire. When he also departed for the Sea, he left the book to his eldest daughter, Elanor Fairbairn, and her descendants (the Fairbairns of the Towers or Wardens of Westmarch).[1]

The original first volume was Bilbo's private diary, and attached to it, in a single red case, were the three large volumes bound in red leather: the Translations, which he gave to Frodo as a parting gift. The Fairbairns added a fifth volume containing commentaries, genealogies and various other matter concerning the Hobbit members of the Fellowship of the Ring.[source?] These elaborated trees, intended only for other Hobbits, are a small book in themselves.[2]

Loose leaves record some poems, possibly from oral tradition, and many jesting nonsensical ones are written carelessly in margins and blank spaces by many hands. In the later Ages they were unintelligible or half-remembered fragments. Some were attributed to Samwise Gamgee or Bilbo himself, and others displayed contact with Elvish and Gondorian culture.[4]

Tolkien's inspiration for this repository of lore was the real Red Book of Hergest, the early 15th century compilation of Welsh history and poetry that contains the manuscript of the Mabinogion. Bound (and rebound) in red leather, in the Bodleian Library, Oxford, the manuscript was well known to Tolkien. In the lecture "English and Welsh," published in The Monsters and the Critics, he called it "“one of the treasures of Medieval Welsh.” Another possible echo is the Black Book of Carmarthen.[5]

The framing device of the series is that Bilbo serves as a narrator and chronicler of the War of the Ring, writing new chapters and notes into the Red Book of Westmarch during his stay at Rivendell. It is also implied that Frodo eventually compiles his notes and storytelling into the final volume during the years before his and Bilbo's departure from Middle-earth and Frodo's entrusting of the Red Book to Sam.

As part of the tutorial, Gandalf bring the Red Book of Westmarch to the player bar, and once every day, it allows you to play through a part of the history of Middle-earth, as well as gives you rewards in the form of resources as well as item used to recruit captains.