Riddles in the Dark

Riddles in the Dark is the 5th chapter in The Hobbit. In 1951 Allen and Unwin published a second edition of The Hobbit in which J.R.R. Tolkien substantially revised this chapter to bring the story of the ring and the character Gollum more into line with the forthcoming "New Hobbit".[note 1]

After waking up in the dark goblin tunnels, Bilbo discovers that he was all alone. He fumbles about on all fours, and he soon finds a little metal ring, which he puts into his pocket almost without thinking. Through searching his pockets, he finds the dagger he had found in the troll hoard, and discovers by its pale glow that it too was an Elvish blade, and that goblins are around, but not close enough to worry about. He decides that his only choice is to go forward, so he travels down the goblin tunnel.

Bilbo's way is soon obstructed by an icy pool in the path, but before he could collect his wits, he is met by Gollum, a dark creature, living down in the pool, who used his luminous eyes to catch fish, and always talked to himself, calling himself "my precious". He thought Bilbo might make a tasty treat, but he didn't want to attack while Bilbo was carrying a weapon. To gain time, he challenges Bilbo to a game of riddles, with very dangerous terms: if Gollum asked a riddle Bilbo could not answer, he would have to allow himself to be eaten. However, if Bilbo asked a riddle Gollum could not answer, he promised to show the hobbit the way out. Seeing that he had no choice, Bilbo agrees, and the two exchange several riddles, each getting harder and harder. At last, Bilbo is unable to think of a riddle, though Gollum presses him to ask just one more. Feeling about his pockets, he finds the ring he had found earlier and had forgotten about, and asks out loud to himself, "What have I got in my pocket?". Gollum is outraged, thinking it is a riddle, so Bilbo chooses it as his last riddle. Gollum guesses wrong three times, and is now forced to show Bilbo the way out. 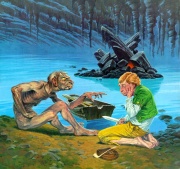 The Riddle Game by Darrell Sweet.

However, years in the darkness had blackened Gollum's heart and made him sneaky. He asks Bilbo to be patient; he has to get necessary supplies, a "birthday present", as he said. As he paddles off, Bilbo thinks Gollum was not going to come back, but he is wrong. Away on the island in the middle of the lake on which he lived, Gollum kept something very precious: a magic, gold ring. Wearing it made the user invisible, and he often used it when he wanted to eat goblin instead of fish. With it, Gollum would be able to strike Bilbo without him knowing what had hit him. However, when Gollum returns to his cave, he finds that the ring has disappeared (he wore the ring a few hours earlier to catch a goblin, and didn't realise that he dropped it in a tunnel on his way back). His blood-curdling shriek sends shudders down Bilbo's spine, though he is not sure what was happening. Getting annoyed at the delay, and though Gollum pleads that he had to keep searching, Bilbo reminds him that he had never answered his last riddle. Suddenly, Gollum's mind jumps to a suspicious guess, and he demands the answer to Bilbo's riddle. He speeds back toward the shore, ready to murder the hobbit and reclaim his "precious".

Realizing that he is in danger, Bilbo runs back up the tunnel and puts his hand in his pocket, the ring slipping onto his finger. He trips on a snag and falls, but Gollum passed him, much to his surprise. Quietly, he listens to Gollum cursing Bilbo and now guessing that he had found his "birthday present". Through his talk, Bilbo deduces that Gollum's "precious" was a magic ring that made the wearer invisible, but Gollum did not think Bilbo knew what it did, and was "tricksy", saying that he did not know the way out, but knew a way in, so he must be off to the "back door". Gollum quickly runs off to head him off, Bilbo following quietly behind. Gollum stops at a low opening, but the loathsome creature stops right there, because he could sense goblins. To make matters worse, he is now aware that Bilbo might have been behind him, and ready for an attempt at escape. Bilbo, frantic to escape, thinks of stabbing Gollum and killing him, but when he considered how miserable the creature really was, he was moved to pity. Instead of killing him, he leaps over his head before Gollum could snatch at him. As he speeds off, Gollum's rage-filled cries echoes: "Thief! Thief! Baggins! We hates it! We hates it forever!"

At the end of the tunnel, Bilbo is relieved to see real sunlight, but forgets his joy when he sees armoured goblins watching the giant door it came through, and somehow, the ring has slipped off his finger and made him visible. Before they could catch him, he puts it back on and vanishes. As the angry goblins frantically search for him, he slips past them and reaches the door, but it was only open a crack. He tries to squeeze through, but he got his buttons caught in the space between the door and door-post. The goblins spot his shadow, but before they can catch him, Bilbo tears loose, ripping his buttons off, and allowing him to hurry out of the tunnels and back into the open. Bilbo had escaped out of the Misty Mountains!

Upon opening his eyes, Bilbo saw, heard, and felt nothing (expect for the wall and the floor). He groped about on all fours, eventually finding a ring of metal on the floor; he put it in his pocket but it didn't help much. Miserable, he felt for his pipe and baccy pouch, both of which he found; however his hopes shattered as he failed to find any matches about himself. He then came across the hilt of his sword - acquired from the Troll's Cave - and upon drawing it he noticed that it shone dimly. Bilbo was comforted that he wore a blade of Gondolin, a place "which so many songs used to sing". Bilbo decided to get up and start moving forwards, with the sword in one hand and one hand feeling the wall.

Eventually, Bilbo felt icy cold water about his feet; he had stumbled across - what turned out to be - Gollum's Lake. Gollum soon made his presence known to Bilbo, terrifying him. Gollum was curious about the hobbit, deciding to appear friendly whilst he considered whether Bilbo was alone, and whether he would be good to eat. Gollum soon suggested a game riddles; if Gollum won he would eat the Hobbit, if he lost he would give Bilbo a present. With some luck on his side, Bilbo managed to defeat Gollum; Gollum was not best pleased with the fairness of the winning riddle: "what have I got in my pocket?".

Obeying his promise to Bilbo, Gollum went back to his island to fetch Bilbo's present. To his horror, he could not find it; the present in question was a ring which he had been given as a birthday present. Bilbo worked this out, but thought that it was best not to tell Gollum that he already had his present. Instead he asked the pardon-begging Gollum if he would show him the way out as an alternative.

Together they went down the passages; Bilbo was very quiet, whilst Gollum was "flip-flapping along". Momentarily, Bilbo slipped on the ring, surprising Gollum as he lost sight of him. Eventually they came to the right passage ("six right, four left"), and it was here the two departed - Bilbo was quite glad of it.

Bilbo went down the new passage, eventually seeing a glimmer of day light from around the corner. He ran around the corner and first saw that the light was coming through a door, slightly open. He blinked and then saw goblins in full armour with swords - they saw him too. By accident or by some presence of mind, he slipped on the ring, disappearing from the sight of the goblins. He snook behind a big barrel as the goblins burst into activity trying to find him. Eventually he ran for the door, dodging countless goblins; he was knocked over by a confused goblin, slipped between the legs of a big goblin and ran for the door. He squeezed, but got stuck. Suddenly a goblin shouted "There's a shadow by the door, Somebody's outside!". Terrified, Bilbo burst his way through, letting his buttons fly off in all directions. He leapt down the steps and escaped.

Bilbo falls down a chasm whilst fighting a Goblin. Gollum first appears euphoric as he comes across the dying goblin. However, in dragging him away the goblin attacks him and in the ensuing struggle ring falls out of Gollum's pouch. As Gollum drags the goblin to his island in the middle of his lake, Bilbo picks up the ring and puts it in his pocket. Curious of Gollum, Bilbo follows and sees him killing the goblin on his island. Gollums spots Bilbo and silently travels across the lake in his boat. He approaches Bilbo asking, 'what is it, precious?' With his sword in hand, Bilbo demands that he be shown a way out. They agree to play a game of riddles; if Bilbo won Gollum would show him the way out, if Gollum won he would eat Bilbo. Most of the riddles in The Hobbit are asked and answers in similar terms as the book, including Bilbo's questionable last "riddle", 'what have I got in my pocket?' Gollum fails to answer in three guesses but become enraged when Bilbo refused to tell him what he had in his pocket. He deduced that Bilbo had stolen the ring and proceeds to chase Bilbo. In the process Bilbo slips through a narrow chasm in which he loses his buttons on his coat. He then fall over and the ring falls onto his finger, making him invisible. Gollum heads for the exit and Bilbo follows. Gollums hides as the rest of Thorin and Company run past, escaping the mountains and the goblins. Bilbo then contemplates killing Gollum, but decides not to and leaps over Gollum and escapes. In anger Gollum declares that he 'hates it [Bilbo] forever'.