Snowmane was the steed of Théoden, King of Rohan. His sire was Lightfoot[1] and was probably one of the Mearas.[2]

Théoden rode with him to the Battle of the Pelennor Fields. The steed was killed when struck with a black dart by the Witch-king, and he fell on the King, mortally wounding him.[1]

Snowmane, also referred to as Théoden's Bane and Master's Bane, was buried where he fell. On the site known as Snowmane's Howe, a stone was erected and there the grass grew the most green ever after.[1] 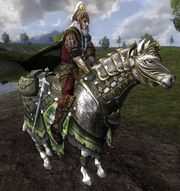 King Théoden on Snowmane in The Lord of the Rings Online

Snowmane accompanied Théoden to the Battle of the Hornburg, and was ridden on the final charge out of the fortress. He fell on the Pelennor Fields much as described in the book.