Difference between revisions of "South Gondor" 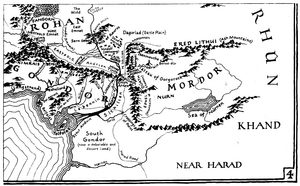 Map of Harondor and neighbouring regions

South Gondor, known in Sindarin as Harondor, was a region south of Ithilien.[1]

Harondor's borders were probably the river Poros in the north,[2] possibly the river Harnen in the south,[3] the Ephel Dúath in the east and the river Anduin and the Bay of Belfalas in the west. It was described as a "desert land" at the time of the War of the Ring.[1] However, it is possible that this meant that it was a land that was deserted by its inhabitants because of the wars between Gondor and the Corsairs of Umbar and the Haradrim.[note 1] It is possible that Harondor had a climate that was fluctuating between mild winters and very hot and dry summers.[4][note 2]

Harondor was absorbed by Gondor during the height of its power, probably the expansions of Tarannon Falastur, who extended the sway of Gondor along the coasts west and south of the Mouths of Anduin.[5][6]

Harondor was part of Gondor until the Kin-strife when it became a debatable land between the Corsairs of Umbar and the Kings of Gondor.[7]

During the days of Steward Túrin II, the Haradrim occupied Harondor and there was much fighting along the Poros. When they started invading Ithilien, many Rohirrim came to the support of Gondor and won (T.A. 2885).[8]

The Sindarin word Harondor seems[who?] to contain har- (as in Harad, meaning "south")[9] and Gondor.[source?]

Several settlements and sites in Harondor, its history, geography, flora and fauna, inhabitants, politics and power and warcraft are mentioned in the MERP module Southern Gondor: The Land.