Difference between revisions of "Standing Silence" 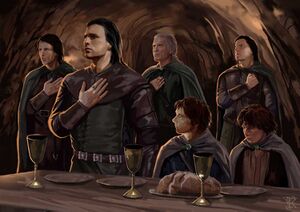 Standing Silence[1] was a custom of the Gondorians to stand in a moment of silence, facing west, before meals. As Faramir told Frodo Baggins in Henneth Annûn, "We look toward Númenor that was, and beyond to Elvenhome that is, and to that which is beyond Elvenhome and will ever be."[2]

For anyone who had previously been to events in the Tolkien Society the Standing Silence and the toasts to the Professor and to absent friends were of course expected and familiar as old friends, but though one has read about it, it is a different matter to actually be there and be a part of it. Rituals have the function of tying people together, of strengthening the sense of unity and common purpose and interests, and this sense of community is, at least for me, a very valuable addition to being a Tolkien enthusiast.
—The Return of the Ring by Troels Forchhammer