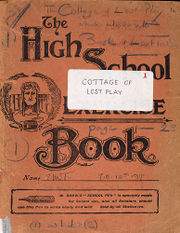 Back in the Cottage of Lost Play, Eriol heard from Lindo the tales of "The Theft of Melko and the Darkening of Valinor", "The Flight of the Noldoli" and "The Sun and Moon": how Melko stole the jewels of the Noldoli and destroyed the Two Trees; and how Fëanor rose in rebellion against the Valar and lead the Noldoli into exile, killing some Solosimpi in the way.