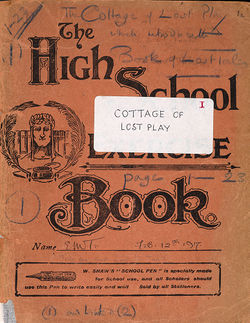 In the Preface of Part One, Christopher Tolkien presents The Book of Lost Tales mentioning the complicated edition of The Silmarillion and his wish of publishing his father's mythology from its beginning. Although Tolkien wrote these tales in different order and left some of them in a stub stage, his son published them in narrative order, so the book has a similar structure to The Silmarillion. At the end of each chapter, Christopher comments on the different manuscripts and compares the narrative with the published Silmarillion and Unfinished Tales. He also includes an analysis of the evolution of the names used in the chapter and poems related with the story.

Eriol, a mariner, was led to Tol Eressëa, which he walked through for many days till he reached the Cottage of Lost Play, where he was welcomed by its owners Vairë and Lindo. After dinner, they explained how the isle was the home of Elves, but in ancient times it was visited in dreams by the children of Men until the path from the Great Lands was blocked. Then, Meril-i-Turinqi the queen of Tol Eressëa, allowed Vairë and Lindo to build the Cottage of Lost Play, where the old stories were gathered and sung for the children of the Fairies.

Winter came to Tol Eressëa, so Eriol stayed in the Cottage for many days. One night, he told the children there about his life, and in return Vëannë told him "The Tale of Tinúviel", about the struggles of Beren and Tinúviel, two lovers who faced Melko and stole from him one of the Silmarils. Vëannë did not know the ending of the tale, so one of the children explained the happy ending of the two lovers, who came from the dead.

In the first day of Turuhalmë, Eltas told a much sadder story: "Turambar and the Foalókë", about Túrin, who suffered the curse of Melko made upon his family, and killed himself soon after slaying the dragon Glorund. The tale ended with Úrin bringing the dragon's cursed treasure to Artanor, the kingdom of Tinwelint.

Many people in the Cottage wished to hear the tale of the Necklace of the Dwarves, but Eltas explained that the tales of the coming of Tuor and Eärendel were to be known first. Lindo asked Littleheart to tell those tales, but these were very long, and it would require seven meetings around the Tale-fire to hear them all. Thus, a feast was prepared, and Meril and Ailios were called to help Littleheart in the telling. Three days later, they were all gathered and Littleheart began the tale of "The Fall of Gondolin": how Tuor was guided by Ulmo to Gondolin, the last stronghold of the Gnomes, and how there he begot his son Eärendel; and how the city was destroyed by Melko's armies and the pride of king Turgon. Ailios began the next tale: "The Nauglafring", which continued the story of the gold of Glomund in Artanor, from which Tinwelint only kept the Nauglafring. Due to this necklace and the Silmaril set in it, the king and his kingdom fell in disgrace, and later his heir Dior suffered the same doom. Dior's daughter Elwing ran away and joined the exiles of Gondolin in the mouth of Sirion. Now all the tales joined together in the great "Tale of Eärendel", which was also the longest.

Sadly, Tolkien never ended the following tales, which were not developed beyond outlines and notes, most of them contradictory. But in brief, these were meant to tell the travels of Eärendel till he became a star, the last battles in which Melko was defeated, the coming of the Gnomes to Tol Eressëa, how Eriol drank limpë and married, the coming of Men to Tol Eressëa, the battles between Men and Elves, the fading of the Elves, how Tol Eressëa became England and how Eriol wrote the ending of the Tales. At some point, Tolkien also tried to replace the narrative frame of Eriol with Ælfwine of Luthany, even writing a long narrative about his coming to the Lonely Isle.

In each Part, Christopher includes an Appendix on names, giving the etymology of the Elvish names as explained in the Qenya Lexicon, the Gnomish Lexicon, and other sources related to Qenya and Gnomish, the first languages of Tolkien's mythology.