The History of The Hobbit

The History of The Hobbit

The History of The Hobbit traces the evolution of J.R.R. Tolkien's The Hobbit through the various extant manuscripts and drafts (formerly unpublished). The editor, John D. Rateliff, presents an extensive study on the early development of The Hobbit, and also details how Tolkien made revisions to the story to accommodate the events in The Lord of the Rings. 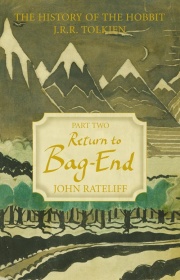 The first edition of The History of The Hobbit was released in two parts, Mr. Baggins (Part One) and Return to Bag End (Part Two) in May and June of 2007 in the U.K. by HarperCollins, then in September in the U.S. by Houghton Mifflin, which also released it as a boxed set in October. The Houghton Mifflin boxed set also includes a new edition of The Hobbit with a short introduction by Christopher Tolkien, a reset text incorporating the most up-to-date corrections, and all of Tolkien's own drawings and color illustrations, including the rare "Mirkwood" piece.[1]

In an interview conducted before the publication, Rateliff described the undertaking in the following way:

The big project, which I've been working on for years and will finally be sending to the publisher near the end of this year, is a book called The History of The Hobbit. It's rather along the lines of Christopher Tolkien's editions that make up the History of Middle-Earth series (which I highly recommend if you haven't read them): an edition of the original manuscript of The Hobbit with extensive commentary on how Mr. Baggins' story fits into Tolkien's legendarium. It's a big book filled with the entire text of Tolkien's first draft, along with short essays about everything from rings of invisibility or Tolkien's spiders to a detailed account of just when Tolkien wrote the book (which can actually be reconstructed from available evidence to within a month or two on either end). I hope people will like it when it finally sees the light of day.
—John Rateliff[2]

On 24 March 2011, Rateliff announced that HarperCollins is reprinting, together with an Addendum, The History of The Hobbit as a single-volume book.[3] This "Revised Updated edition" was released on 27 October 2011.[4] The Addendum contains (as announced by Rateliff)[5]:

From the Publisher (Second Edition)

In one volume for the first time, this revised and updated examination of how J.R.R.Tolkien came to write his original masterpiece The Hobbit includes his complete unpublished draft version of the story, together with notes and illustrations by Tolkien himself.

For the first time in one volume, The History of The Hobbit presents the complete unpublished text of the original manuscript of J.R.R. Tolkien's The Hobbit, accompanied by John Rateliff's lively and informative account of how the book came to be written and published. As well as recording the numerous changes made to the story both before and after publication, it examines – chapter-by-chapter – why those changes were made and how they reflect Tolkien's ever-growing concept of Middle-earth.

The Hobbit was first published on 21 September 1937. Like its successor, The Lord of the Rings, it is a story that "grew in the telling", and many characters and story threads in the published text are completely different from what Tolkien first wrote to read aloud to his young sons as part of their "fireside reads".

As well as reproducing the original version of one of literature's most famous stories, both on its own merits and as the foundation for The Lord of the Rings, this new book includes many little-known illustrations and previously unpublished maps for The Hobbit by Tolkien himself. Also featured are extensive annotations and commentaries on the date of composition, how Tolkien's professional and early mythological writings influenced the story, the imaginary geography he created, and how Tolkien came to revise the book years after publication to accommodate events in The Lord of the Rings.

Like Christopher Tolkien's The History of The Lord of the Rings before it, this is a thoughtful yet exhaustive examination of one of the most treasured stories in English literature. Long overdue for a classic book now celebrating 75 years in print, this companion edition offers fascinating new insights for those who have grown up with this enchanting tale, and will delight those who are about to enter Bilbo's round door for the first time.

John D. Rateliff moved to Wisconsin in 1981 in order to work with the Tolkien manuscripts at Marquette University. He has been active in Tolkien scholarship for many years, delivering papers on Tolkien and the Inklings. While at Marquette, he assisted in the collation of their holdings with those Christopher Tolkien was editing for his History of Middle-earth series. A professional editor, he lives in the Seattle area with his wife and three cats, only one of whom is named after a Tolkien character.