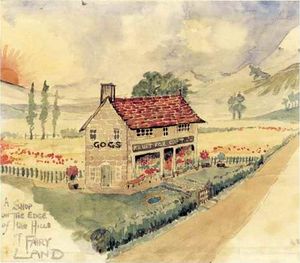 A Shop on the Edge of the Hills of Fairy Land by J.R.R. Tolkien

"The Orgog" is the title of an unfinished and unpublished children's tale by J.R.R. Tolkien.

When the Tolkien family had moved in 1924 to 2 Darnley Road in Leeds, John Tolkien recalls that "The Orgog" was one of the tales read by his father to him, when he could not fall asleep. While most of these tales were not written down, "The Orgog" survives as an unfinished, typewritten manuscript. Not much is known of the story itself, except that it is a "strange, convoluted tale of an odd creature travelling through a fantastic landscape."[1][2][3][4]

It has been suggested that Tolkien's watercolour A Shop on the Edge of the Hills of Fairy Land (painted in 1924) is likely related to the tale,[note 1] as the word "Gogs" appears on the depicted shop building (although there is no mention of such a shop in the tale). The painting is dedicated to John.[3]

The meaning of orgog, and if the word has any connection to one of Tolkien's invented languages, is unknown.