Difference between revisions of "The Two Towers"

The Two Towers is the second of three volumes in The Lord of the Rings. It is preceded by The Fellowship of the Ring and followed by The Return of the King. The Two Towers was originally released on 11 November 1954 in the United Kingdom.

The volume is divided into two books, Book III and IV. 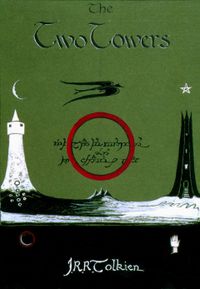 Tolkien's preliminary design for the dust-jacket of The Two Towers.

A trailer of The Two Towers film interprets the title as referring to the alliance between Orthanc and Barad-dûr.[1]