Several years after the Sack of Erebor by the dragon Smaug, the exiled King of Durin's folk Thrór was murdered by Orcs. Thráin II led a host of Dwarves from his and other house in a great war against the Orcs of the Misty Mountains. After that, Thráin's people moved to the hills of Dunland and stayed for some time before moving to the Blue Mountains and established their Halls in the year T.A. 2802.

For nearly forty years Thráin ruled his people in the Ered Luin but was driven to obsession by his ring of power. In 2841 he left with a small group of followers to return to the Erebor determined to kill Smaug and take his father's realm back. But in 2845 while encamped on the eves of Mirkwood Thráin was captured by the servants of the Necromancer and taken to Dol Guldur; where he was tortured till his death many years later. His followers including Balin and Dwalin did not know his fate, and after searching for days they returned to the Ered Luin.

Thorin was made the ruler of Durin's folk, and under his leadership, his people prospered, their trade increased as well as their numbers, not only from birth but wandering Longbeards heard of Thorin's realm and came to him. 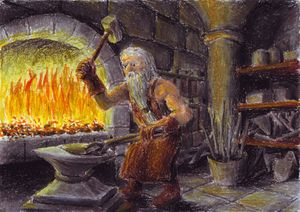 Thorin ruled in the Ered Luin for nearly one hundred years, until he met Gandalf the Wizard who helped him concoct a plan to take back Erebor from Smaug; he left his halls for the last time on a quest to take back his former home. After many months Thorin and Company took the mountain as theirs and Thorin declared himself King under the Mountain after Smaug was killed; but after a great battle with Orcs and Wargs Thorin was mortally wounded and died, never being able to enjoy the realm he gained.

Dissolvement as the Capital

After Thorin's death, his cousin Dáin II Ironfoot of the Iron Hills became king of Durin's folk; and when news reached Durin's folk in the Ered Luin that Erebor was retaken, it is believed that most of them moved to the Lonely Mountain. Therefore, Thorin's Halls became a sub-realm of Durin's folk.

"Thorin's Hall" is one of the major cities in the game. Following the death of Thorin, many Longbeards move away and the rule of Thorin's Hall falls to the Dourhands: a group of Blue Mountain Dwarves who are the descendants of the Petty-dwarves. In T.A. 3016 King Dáin sends a company of Longbeards to investigate the Dourhands, which results in the rogue dwarves being thrown out and Dwalin becoming the Steward of Thorin's Hall.

Thorin's Hall is the default location for Dwarf characters to begin their journey in Middle-Earth: the city itself is safe from dangers, but outlying outposts face the threats of wild beasts, remaining Dourhands and occasional Goblins.