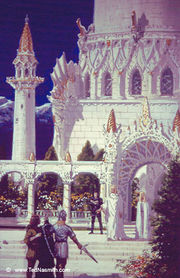 There are more details told in the early version of the legendarium of The Book of Lost Tales. It is said that it was the loftiest of all towers in Gondolin. When Tuor and Voronwë came to Gondolin, they were received by the King on the stairs, with Meglin at his right hand and Idril at his left. There Tuor gave Ulmo's warning to the King with prophetical words.[3]:160-1

During the siege of the city, Turgon watched most of the battle from his tower, sending troops where they were needed.[3]:180 Once the King ordered the survivors to leave the city, he remained behind, climbing to the topmost pinnacle of the white tower where he cried: "Great is the victory of the Noldoli!". While the exiles left, the house of the King gathered around the base of the king's tower to fight till the end. Later, Idril and Tuor saw from Gar Ainion how the tower was beset. Then the dragons crushed the base and the tower fell with a terrible clangour, and thus died King Turgon.[3]:185-7