Difference between revisions of "Umbar"

in T.A. 933 Gondor's King Eärnil I captured Umbar in a Surprise Attack after a siege by sea and land, although this was "at great cost." It became a great harbour and fortress of the power of Gondor. Ironically, it was outside Umbar where Eärnil with his ships and men perished in a great storm (T.A. 936).[8][9]

Umbar and the southern provinces experienced a rebellion during the civil war of Gondor (T.A. 1437-T.A. 1447); together with the people of Pelargir, Umbar supported the usurper Castamir. When the war had ended, Castamir's sons and their supporters left Pelargir and established themselves at Umbar; from that point on, Umbar remained an enemy of the King.[9] 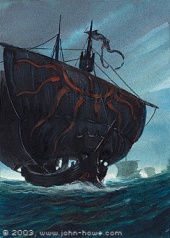 In the meantime, the Haradrim were "engaged in wars and feuds of their own" and Gondor was threatened by the Wainriders' empire from Rhûn.[11] Umbar still fell when enemies invaded Gondor from the east and south in T.A. 1944, preventing Gondor to use it to support its forces from the sea. However Eärnil's Southern Army vanquished the invaders.

Umbar appeared on the bottom edge of the maps found in earlier editions of The Lord of the Rings, but it is absent from modern editions, which regrettably map a slightly smaller area of the Westlands.