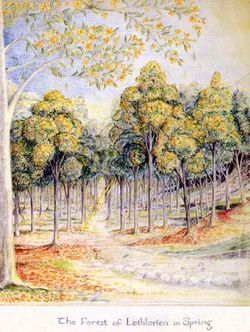 In Tolkien’s drawing ‘The Forest of Lothlórien in Spring’ (see top-right corner), mallorn-trees with their flowers and leaves are depicted. Cf. this real-life depiction of the ‘Golden Rain’:

It is apparent that the mallorn and the Golden Rain do look fairly similar, although one cannot be sure.