The White Tree of Gondor appears on the banners of Gondor.

Book V, Chapter 6: "The Battle of the Pelennor Fields"

The emblem of Elendil and his heirs was seven five-pointed stars, each representing one of the palantíri that Elendil brought from Númenor. In Gondor they were set on a sable coat of arms, together with the White Tree, which represented any of the descendants of Nimloth that grew in Minas Ithil and, later, Minas Tirith.

To this device the Kings of the line of Elendil added the Silver Crown, which was the chief mark of royalty. In Arnor a single five-pointed star became used as a device, the Elendilmir, representing the Star of Earendil. In Gondor the device including the stars and the Silver Crown fell out of general use, until the time of Elessar and the Reunited Kingdom.[1]

""... and upon the White Tower of the citadel the standard of the Stewards, bright argent like snow in the sun, bearing no charge nor device.""
― Lord of the rings, "The Steward and the King"

The Stewards of Gondor never took any heraldic device of their own, and their banners were white with no charge.

"Upon the left was a banner, silver upon blue, a ship swan-prowed faring on the sea."
― The Lord of the rings, "The Field of Cormallen"

The army of Dol Amroth used blue banners with silver swan-ships. The prince is said to use a ship and a swan on his banners.[2] Dol Amroth was used as a port by the Elves of Lórien sailing west in their swanships during the Second and Third Age.

In the movies, the flag consists of the White Tree on a black background.

"It bore the running horse, white upon green, that was the emblem of the House of Eorl"
― Lord of the rings, Book III Chapter 6 (The King of the Golden Hall) 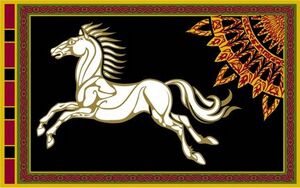 The flag as depicted in most replicas

In contrast to the books, the movie version of the flag appears to have a black background. Some speculate that it is very dark green. [3]

Other replicas show it as a green flag.[4]