"There Bredhil the Blessed  the bluemantled,
the Lady of the heights  as lovely as the snow
in lights gleaming,  of the legions of the stars,
the cold immortal  Queen of mountains,
too fair and terrible  too far and high
for mortal eyes,  in Manwë's court..."
― The Flight of the Noldoli from Valinor, vv. 45-50 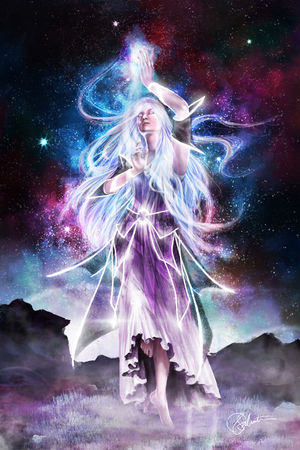 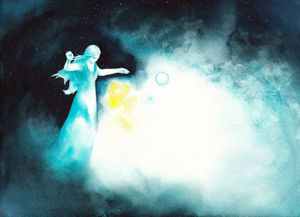 In narrative she is refered as Varda the Beautiful. She became the wife of Manwë, the Lord of the Gods, and they had two children: Úrion and Erinti.[24] During the Music of the Ainur, she was the one who thought most on white and silver light, and on stars. When she and Manwë entered the new world, they arose with wings of power that they gathered to travel through Vaitya, Ilwë and Vilna, the three airs. With them came many spirits of the airs that loved them, the Mánir and the Súruli. In those first days there were dispersed lights flowing through all the airs, and while she was playing in the sky, Varda set a few stars. When Aulë and Melko began making two lamps to illuminate all the regions of the world, Manwë and Varda gathered a vast amount of the light, and kindled the lamps with it. After the lamps were destroyed and the Valar built their realm, Varda proposed to gather all the light that remained in the airs and spilled in the earth to make a beacon upon Taniquetil, but instead the light was gathered in two cauldrons: Kulullin and Silindrin. To help Palúrien to make the Two Trees of Valinor, two holes were opened next to the cauldrons and there were buried many magical things brought by the Valar, Varda contributing with a small star in the silver pit.[25]

Years later, when Manwë informed her that the Elves had awoken, Varda rose joyfully and went to Valmar, where Aulë was working with a basin full of light from the silver cauldron. Hearing the news, the Vala struck his hammer, creating silver sparks. Then Varda took the sparks and mixed them with the light of the basin and molten silver. With this, she flew to the sky and set a lot of new stars of great glory and slumbering power, like Morwinyon. Later, during the council of the Valar, she supported the idea of the Eldar coming to Valinor, as she always had the greatest love for them.[26] 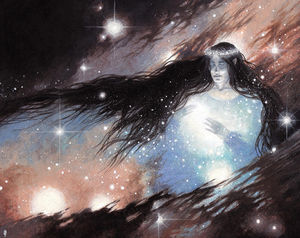 In his last conceptions for his legendarium, Tolkien considered that the solar system was already created when the Valar entered into Eä. Their power would be limited to Arda and therefore the Stars would not be of their concern. In this version Varda did not create the Stars, at least not in general, but her concern acquires a new dimension, as she is the keeper of the Primeval Light.[27]

Therefore Ilúvatar, at the entering of the Valar into Eä, added a theme to the Great Song which was not in it at the first Singing, and he called one of the Ainur to him. Now this was that Spirit which afterwards became Varda (and taking female form became the spouse of Manwë). To Varda Ilúvatar said: 'I will give unto thee a parting gift. Thou shalt take into Eä a light that is holy, coming new from Me, unsullied by the thought and lust of Melkor, and with thee it shall enter into Eä, and be in Eä, but not of Eä.' Wherefore Varda is the most holy and revered of all the Valar, and those that name the light of Varda name the love of Eä that Eru has, and they are afraid, less only to the name of the One.

Later, after the First War, Varda gave Ari (Arien) a portion of the blessed light to inhabit the Sun, but the Maia is ravished by Melkor and the blessed light was lost.[27] However, the original light of the Sun and Moon had been used to kindle the Two Trees.[28]

Although Varda did not create the Stars, it is said that she designed the patterns of the main constellations as prophetic signs for the Children of Ilúvatar. However, she is still called "Star-kindler", for she made a great dome above Valinor to protect the airs from the spirits of Melkor. This dome was a Nur-menel (lesser firmament), a simulacrum of the true firmament (Tarmenel), and had very bright stars.[29]

The Valar, being divine beings below the ultimate Creator, Ilúvatar, are thought of[By whom?] as being the Middle-earth equivalent of saints and angels; it has therefore been suggested[By whom?] that Varda, in her role as the most loved and prayed-to Vala, may be an equivalent of the Virgin Mary in Tolkien's own Catholic faith. Another suggestion is the goddess of wisdom, Sophia, also associated with the stars.[30]