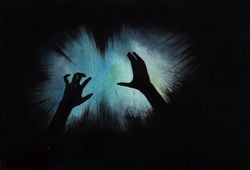 Following his apparent utter defeat in the War of Ring, Sauron's weakened spirit was left bound to the confines of the world, having stepped on the same path to powerlessness as Morgoth had in his banishment to the Void .[4]