A tower had stood on the hill since the days of Elendil, and he had stored the palantír in its chambers. It is said that before the War of the Last Alliance, Elendil stood at the hill watching the hosts of Gil-galad coming to join his forces.[1]

After King Eärendur passed and the kingdom was split in three, all of his sons coveted the hill, or rather the Stone inside. It lay on the exact tri-state point, but eventually passed to Arthedain, the realm of Amlaith, the eldest son of Eärendur, although it already possessed the other two Stones.[3] 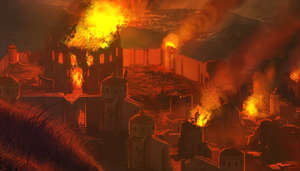 The Fall of Amon Sûl in The Lord of the Rings: The Battle for Middle-earth II

As tensions with Angmar increased, Argeleb fortified his border. A great bastion arose on Weathertop, and the East Road and lower Hoarwell were fortified also. For nigh half a century, the line held, though Argeleb lost his life in battle with the Hillmen. The Witch-king did not trouble the Men, and had sent his troops further East, to the Second Siege of Imladris. But in T.A. 1409, he came forth with such a force from Angmar that no army could stop him. He razed Amon Sûl and brought its mighty walls down.[3] Arveleg, son of Argeleb, was slain,[4] as well as the last prince of Cardolan,[5] but the Lord of the Nazgûl failed to retrieve the palantír. It was secured and brought back to Fornost Erain.[3] 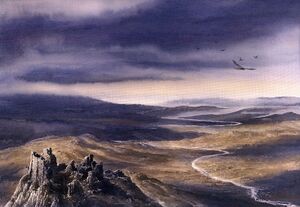 For many centuries, the once great fortress stood in ruins on the hill. The locals paid little heed to it. It faded back into obscurity, and it was not until T.A. 3018 the hill reappeared in the chronicles and annals. In early October, it was the scene of two fights involving the Nazgûl; one with Gandalf on October 3 and one with the Ring-bearer three days later.[6] Gandalf on Shadowfax was secretly chased by the Ringwraiths until the night of October 3, when six[7] or nine[8] Black Riders, led by the Witch King, attacked him. They were repulsed after a violent fight which burnt the hilltop, and Frodo and Aragorn saw the lights of that battle from their camp at the Midgewater Marshes.[9] The Witch King and Khamûl remained watching Weathertop (waiting for the Ring Bearer to come) for two days thereafter, along with three other Wraiths.[10] After fleeing from Bree, Strider and the Hobbits avoided the main road and approached Weathertop from the north. At the top they discovered a cairn with a message from Gandalf, and spotted the Ringwraiths approaching in the distance along the road. That night, the Ringwraiths attacked their camp in a dell below the summit, stabbing Frodo with a Morgul-knife, but were driven off by the others.[1]

"Weathertop" is a translation of the Sindarin Amon Sûl, although it also can be translated as "Hill of the Wind", being a combination of amon ("hill") and sûl ("wind").[11]

Weathertop is the most prominent landmark of the Lone-lands region. After the passing of Aragorn and the Hobbits, the Ranger Candaith sets up a camp at its foothold, the player later helps him defend the summit of Weathertop against two enemy assaults.