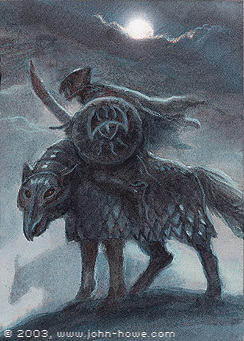 Orcs used wolves as steeds back in the First Age,[1] as well as wargs well into the Third Age, when wolf-riders came in the Battle of Five Armies.[2]

During the War of the Ring, Saruman employed "Orcs into his service, and Wolf-riders, and evil Men"[note 1] to harass Rohan.[3] Before the Battle of the Hornburg, scouts reported that Wolf-riders were roaming the valley about Helm's Deep.[4]

In the early version of the legendarium in The Book of Lost Tales, a horde of wolfriders chased some of the Exiles of Gondolin in Tumladin, Eärendel among them, but they are saved by Tuor and his men.[5]

The card Wolf-riders can be played either as a creature or as a short-event, the latter increasing the prowess and strikes of a Wolf attack.[6]

A Warg-riding Orc scout is encountered by the Rohan refugees on their way to Helm's Deep. During the skirmish with warg riders, Aragorn falls from a cliff, and is later found by Brego.