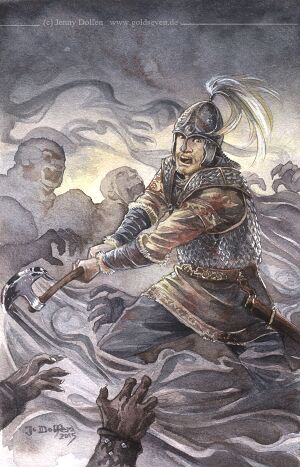 Aurë entuluva! was the battle cry of Húrin during his last stand after the Fifth Battle of Beleriand, also known as the Battle of Unnumbered Tears.

Before the battle, King Fingon had welcomed the armies of his brother Turgon with the cry: "Utúlie'n aurë! The day has come!" The hosts of Elves and Men had hope to defeat Morgoth, but were defeated and forced to retreat leaving many dead. After his lord and companions had fallen, Húrin remained fighting, killing with his axe any Orc that approached him. With every strike he cried: "Aurë entuluva! Day shall come again!". He cried it seventy times before Orcs captured him alive, as Morgoth had ordered.[1]