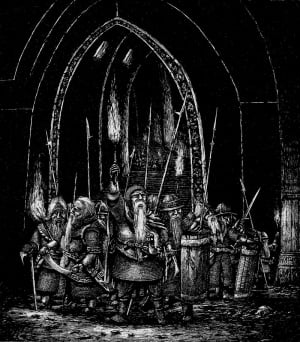 Afterward Flói was buried under the grass near Mirrormere, and the Dwarves continued systematically taking the eastern parts of the city which chiefly included the Twenty-first Hall. The Colony also managed to find many old treasures such as mithril, gold, Durin's Axe, and a helm.[note 1] Balin set up his throne in the Chamber of Mazarbul, proclaiming himself Lord of Moria.[5](Although he was of Durin's royal line the colony was too small for a kingdom thus Balin was only Lord but not King of Moria)

Turn of the tables[edit]

After receiving no news from the Colony for twenty-five years, the Dwarves of Erebor became worried about the fate of their kin. As a result, Dáin Ironfoot sent Glóin and his son Gimli to Rivendell to seek news about the colony and advice from Elrond. When Frodo Baggins met Glóin and asked him about Ori, Balin, and Óin, his face darkened, saying that he did not know.[4] Gimli eventually learned of their fate when he crossed the dwarven realm with the Fellowship of the Ring. He later reported their fate to Thorin Stonehelm.[5]