The Blue[note 1] Wizards (S. Ithryn Luin) were two Wizards sent to contest the will of Sauron in the furthest regions of Middle-earth. Tolkien's conception of the two Blue Wizards changed dramatically between his earlier and later writings. 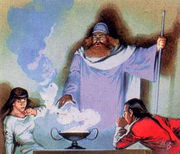