Carn Dûm was the chief fortress of the realm of Angmar[3][4] and the seat of its king.[5] It was located at the western end of the Mountains of Angmar, the north-western extension of the Misty Mountains.[1][6]

In 1974,[9] the combined armies of Gondor, Lindon and Arnor crossed the river Lune and defeated the forces of Angmar in a great battle on the plain between Nenuial and the North Downs. The Witch-king and his surviving forces fled northwards toward Angmar, but they were overtaken by the cavalry of Gondor with prince Eärnur at their head and cut off by a force led by Glorfindel that came from the south out of Rivendell before before they were able to reach shelter in Carn Dûm. The Witch-king was able to flee, but the remaining forces of Angmar were utterly defeated and no man or orc of the realm of Angmar remained west of the Mountains.[10] As a consequence, it is possible that Carn Dûm was destroyed. It is also possible that Carn Dûm was repopulated after 2480, when Orcs began making secret strongholds in the Misty Mountains,[11] but the fate of Carn Dûm is not mentioned in the Annals of the Kings and Rulers or in the Tale of Years.

On September 28 of 3018[12] While Merry was trapped with Frodo in a Barrow, he had a dream that he and others were attacked and defeated by the men of Carn Dûm at night and that his heart had been pierced with a spear.[13] Some say that this barrow was the grave of the last prince of Cardolan.[7] It is possible that he dreamt of what happened to the last prince of Cardolan and his men.[14][15]

The etymology of Carn Dûm is uncertain, but it is often interpreted as a Sindarin name.

In early manuscripts of The Lord of the Rings, Carndoom and later Caron-dûn (both meaning "Red Valley") appear as early names of Dimrill Dale.[16] Paul Strack favours these early terms as Noldorin precursors of Sindarin Carn Dûm.[17] David Salo also favours the Sindarin interpretation, giving it as "Red Valley", a compound of carn + tûm.[18]

Another suggestion, is that the name roughly translates as "mountain fortress" in Gaelic; although Tolkien uses Celtic elements for some translated Mannish names, this would have been the only instance where he uses Gaelic. It is unknown whether this is just coincidence or not.[19] 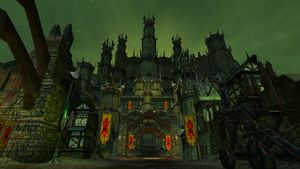 Carn Dum in The Lord of the Rings Online

Carn Dûm is the capital of Angmar. The campaign begins with its construction, and it is besieged once by Glorfindel. Carn Dûm is also playable in the skirmish section of the game.

Carn Dum is located in the game's region of Angmar and was both the main focus of storyline and the final end-game dungeon for the game's original release. It is ruled by Angmar's shadow that has returned to this city in the form of the False King Mordirith, Steward of Angmar.

Carn Dum is the final level in the game. It is ruled by Agandaûr, a descendant of the Black Númenóreans and a servant of Sauron.