Celebrían was an Elf-lady of Lothlórien, the daughter of Celeborn and Galadriel. As the wife of Elrond, she was also known as Lady of Rivendell. She was the mother of Arwen and the twins Elrohir and Elladan. Her daughter would later marry Aragorn Elessar, hero of the War of the Ring, and become the Queen of the Reunited Kingdom.

Celebrían was born early in the Second Age, likely in S.A. 300, when Galadriel refused to return to Eressëa, and passed over the Mountains.[1] Celebrían lived in Eregion, and later moved to Lórien with her mother in S.A. 1350. In S.A. 1701, she went to Rivendell with Galadriel searching for Celeborn, where she first met Lord Elrond, who loved her in secret.[2] Centuries later they would marry, in T.A. 109. Their first children, the twins Elladan and Elrohir, were born in 130, and their daughter Arwen in 241.[3] She had inherited the Elfstone from her mother, which was later given to Arwen, her daughter.[4] 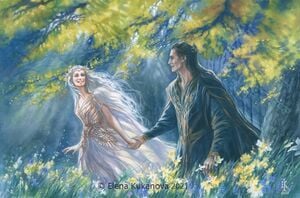 In T.A. 2509, on a trip to Lórien to visit her parents, she was waylaid by Orcs of the Misty Mountains in the Redhorn Pass. She was captured and tormented, receiving a poisoned wound. Her sons rescued her and she was physically healed by Elrond, but never fully recovered in mind or spirit, and no longer wished to stay in Middle-earth. She left for the Grey Havens and passed over the Great Sea the following year.[3]

She was followed by Elrond and her mother Galadriel, who eventually took the White Ship in the end of the Third Age and also passed the Great Sea to the Undying Lands,[5] where all presumably reunited.