Dís (born Third Age 2760) was a female Dwarf of the royal line of Durin's folk.

Dís was the daughter of King Thráin II and younger sister of Thorin and Frerin. Like her brothers, she was born in Lonely Mountain and was driven into exile in T.A. 2770 when the dragon Smaug sacked the kingdom. She was the mother of Fíli and Kíli.

Although female Dwarves were rarely seen by outsiders, or mentioned in Dwarven records, Dís was an exceptional case: her sons were killed heroically defending their mortally wounded uncle Thorin in the Battle of Five Armies.[1]

Jim Allan has suggested that Dís is derived from Old Norse -dís ("sister") found in many Nordic names (such as Herdís, Hjördís, etc).[2] 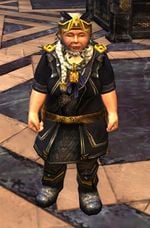 Dís in The Lord of the Rings Online

Although very old, Dís is still alive during the War of the Ring. She holds the honorary position of the Keeper of Ravenhill, where she tends to ravens now led by Arcah, Daughter of Croär. After the Battle of Dale she and the surviving companions of Thorin Oakenshield pay respect to tombs of her brother and sons, which are now next to that of King Dain Ironfoot.

A female dwarf named "Princess Disa" appears in the Amazon Studios television series, but she was created for the show and is not based on the character found in the legendarium.