The Elvenking's Halls[1] were a cave system in northern Mirkwood, in which King Thranduil and many of the Elves of Mirkwood lived during most of the Third Age and into the Fourth Age.

The halls were just inside the eastern border of Mirkwood on the north bank of the Forest River, some miles upstream from Esgaroth.[1] The great cave had many passages and wide halls and was more wholesome than the goblin tunnels in the Misty Mountains. While most of the Elves lived in the woods the king's halls served as his palace and treasure vault and was also a fortress for the Elves in times of danger.[2]

The entryway to the halls had huge stone doors[2] that were closed and secured by magic. The throne room for Thranduil was a great hall with pillars carved from the living rock. In lower levels were cells for prisoners and at the lowest part of the caves were the cellars of the king. These cellars were built over an underground stream so that empty barrels could be dropped into the water and floated out to the Forest River through a gate barred by a portcullis.[3]

About T.A. 1050 the Shadow began to fall upon Greenwood (causing it to be called Mirkwood).[4] In response, King Thranduil led his people to the north-east corner of the forest and delved there a fortress and series of great halls underground. He was inspired in this enterprise by Thingol's halls of Menegroth in Doriath during the First Age. Like Thingol, Thranduil enlisted the aid of the Dwarves in making his stronghold, though the Elvenking's Halls of Mirkwood were less grand than that magnificent ancient cavern.[note 1][5][6] 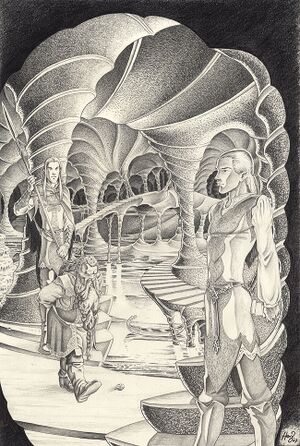 In the autumn of T.A. 2941[4] Thorin and Company were traversing Mirkwood and had run out of food. Spotting some woodland feasts the Company attempted to enter these gatherings but were thwarted each time. On the third attempt Thorin was captured and brought to Thranduil's halls where he was interrogated by the king. Angered by Thorin's refusal to answer his questions, Thranduil had Thorin locked in his innermost cell.[2]

Soon after, the twelve remaining dwarves (but not Bilbo Baggins) were taken by the Elves and brought to Thranduil's halls. They fared no better with the king and were also locked in the king's dungeon. Bilbo though, through the invisibility conferred by his ring, roamed about the halls and discovered the cellars and the trap door leading to the underground stream. Through good luck Bilbo was able to obtain the keys to the dwarves' cells, free them, and pack them into empty barrels in the cellar. Workers then came and rolled the barrels through the trap door and thus the hobbit (riding one of the barrels) effected the escape of the Company from Thranduil's halls.[3]

In 3017, Aragorn captured Gollum in the Dead Marshes and brought him to Thranduil's halls.[4] As was told in the Council of Elrond, Gollum was kept in prison but had been allowed to climb a tree, with guards to watch him.[7] About 20 June 3018, Orcs attacked and Gollum disappeared.[8] Nothing more is said of these halls.

The Elvenking's Halls is featured in the second Hobbit film, The Desolation of Smaug.

The Elvenking's Halls are known as "Felegoth" in-game, and is said to be situated beneath the hill of Cerin Dorn. It serves as a major stronghold in the North for adventurers who are questing, and those that serve King Thranduil.